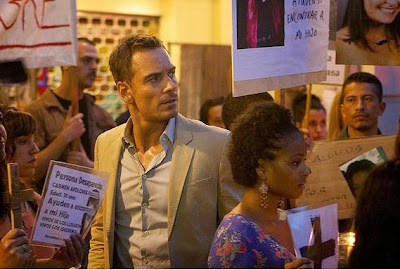 FACE IN THE CROWD: Fassbender stars as a high-powered attorney who meets his comeuppance.

A decidedly stark sense of gloom and doom permeates Ridley Scott's latest offering, The Counselor, a strongly acted but uneven drama/suspense thriller about greed, drug-world terror and the wiles of the female.

Michael Fassbender (Shame, X-Men: Origins) leads an all-star ensemble in the titular role, a successful lawyer with a roguish streak who strikes up a romance with a fresh-faced Latin beauty (the always brilliant Penelope Cruz) only to have it subsumed when his world his flipped on its head, thanks to a drug deal gone horribly wrong.

Cameron Diaz (as a dangerous, Ferrari-humping dame you don't wanna double cross), Javier Bardem (her feckless, spiky-haired paramour) and Brad Pitt (a two-faced money launderer) all turn in characteristically robust work in their sizeable supporting roles. But it's the script, penned by celebrated novelist-screenwriter Cormac McCarthy (No Country for Old Men) that I have a problem with; it's about as flat as tap water until about the halfway mark when the pieces finally start to fall into place and something resembling a respectable plot starts to emerge and thicken.

With a Hollywood career spanning more than two decades, Scott has built an estimable body of work marked by compelling action thrillers (Black Hawk Down), epics (Gladiator), and riveting dramas (American Gangster) that never fail to reel in viewers. The Counselor, while not a complete letdown, plays more like an of-the-moment expose on the dark side of human nature than a worthwhile cinematic experience.

Overall, The Counselor conveys its point quite vividly (bad life choices often lead to devastating consequences), but in the end you simply wish there was more meat on the bone to satisfy the appetite you'd worked up. Tyrone's Verdict: B-

>> More Cinema: The Carrie remake is a hit-and-miss affair