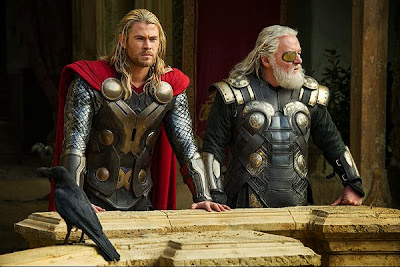 The world needs a saviour in the just-arrived Marvels blockbuster sequel Thor: The Dark World. This go-round, the powerful and mythical Asgard is under siege as King Odin (Anthony Hopkins, flawless) and his royal court are faced with an enemy even they can't withstand -- the resurrected supervillain Malekith (Chris Eccleston) who has set his sights on plunging Earth into utter and permanent darkness.

Never the reluctant hero, Thor (Chris Hemsworth) embarks on what appears to be his most perilous mission yet -- one that reunites him with busybody scientist Jane Foster (Natalie Portman, woefully underutilized) and calls for unforeseeable sacrifice.

Directed by Alan Taylor, Thor: The Dark World doesn't outdo its original in any significant regard to speak of, but it boasts wit and some genuinely riveting action sequences, while breathing life into the idea that superheroes can crack wise even as they perform the most dangerous kinds of derring-do. (Tom Hiddleston's Loki is a natural).

As such, what this sequel has going for it, above all, is the entertaining blend of intermittent laughs and such ubiquitous concepts as family and revolutionary change. Tyrone's Verdict: B+

Posted by TALLAWAH Magazine (tallawahmagazine@gmail.com) at 10:45 am