SAY IT LOUD: A feast of soul and the spoken word, as the Poetry Society closes 2013 fellowship series 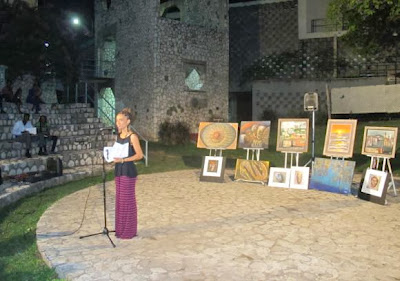 AL FRESCO: MC Yasheka Graham performing hosting duties at the fellowship, which this month featured the likes of Dingo and Cherry Natural.

Each end-of-month, the Poetry Society of Jamaica brings together a gang of established and emerging creative writers to the Edna Manley College's breezy outdoor ampitheatre for a feast of rhymes, rhythms and visual art.

Last Tuesday marked the finale of the 2013 series and, not surprisingly, the evening was chock-full of spirited open-mic sessions, audience feedback, dramatic performances by a handful of the School of Drama's final-year students, before culminating with appearances by four distinctly Jamaican poets -- Dingo, Mel Cooke, Owen 'Blakka' Ellis and Cherry Natural -- each unleashing stirring, occasionally humorous pieces from their diverse body of work, much to the delight of the attentive crowd that only seemed to swell as the night wore on.

Cherry was her usual fiery and energetic self, dropping wit and wisdom on poems like "Fight Back" (centred on relationships and domestic violence), "Levi Jeans" ("Mi believe woman must lyrics man too!") and references to her much-buzzed-about Intellectual Bad Gal disc, which she dropped a couple of months ago. Cooke's brilliant albeit lengthy pieces tackled everything from spirituality and sexuality to the Tivoli incursion, attitudes towards migration and the festive season.

The core highlight of Ellis' stint, meantime, was the rendering of his classic "Keyman," about an overzealous "security guard expert", while Dingo, the first of the four to grace the mic, was accompanied on guitar and sax, as he delved into clever wordplay with "Shopkeeper" and "Blouse & Skirt" full of punchlines and his trademark blend of social commentary and seemingly personal life experiences, all enveloped in a characteristically smooth delivery.

As the Poetry Society of Jamaica, led by the dedicated pair of Tommy Ricketts and Yasheka Graham, gears up to celebrate its 25th year in April 2014, one can't help feeling that such terrific cultural sessions deserve far greater recognition. Hopefully, with sponsorship secured, they can make the leap to television, a la Centric TV's Lyric Cafe and HBO's mega-successful Def Poetry Jam. I'm just saying.