THE MOMENT: Sprinting phenoms Usain Bolt and Shelly-Ann Fraser-Pryce win the IAAF's Male and Female Athletes of the Year Awards 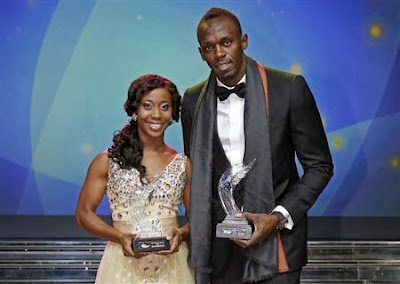 TWO OF A KIND: The sprint superstars pose with their awards at the Monte Carlo-hosted ceremony.

It's not just their record-shattering exploits that have made Usain Bolt and Shelly-Ann Fraser-Pryce such forces of nature in track and field. It goes without saying that what has also endeared them to the global public is that winning mix of charisma, viewer-friendly appeal and game-changing dynamic that they bring to the embattled sport.

Capping a significant year marked by trials (Jamaica thrust into the WADA spotlight) and triumphs (a hefty gold medal haul in Moscow), the Jamaican powerhouse sprinting duo claimed top honours as the Male and Female Athletes of the Yea at the IAAF's Gala and Awards ceremony held at the Salle de Etoiles in postcard-perfect Monte Carlo, Monaco, on Saturday. The grand and memorable occasion represented a first for a Jamaican duo. 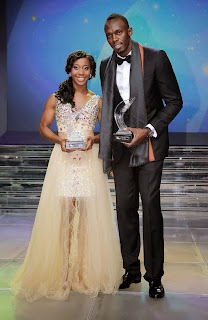 Bolt's win represented not just his fifth hold on the prestigious title but a stark reminder of the benefits of good, old-fashioned hard work. "Every year I come out here and put in the hard work because that's my goal, and I will continue doing so for the years to come," the World's Fastest Man noted during his acceptance speech, while remarking in a post-awards interview: "I know they are proud of me, and we have come under some problems this season, but that's not our focus. Our focus is to uplift our country and not look at the negative."

For the Pocket Rocket, adding this latest accolade to her ever-expanding collection only means that the work continues. "Last year I wasn't shortlisted but this year I decided that I would still work hard," she says, "because when we don't get the things we think we should, it doesn't mean that we should stop working. I believe in hard work and being committed and motivated."

What we believe, here at TALLAWAH, is that both Fraser-Pryce and Bolt remain terrific ambassadors -- not just for Digicel -- but for Brand Jamaica, and the perennial pride of a grateful nation.

Posted by TALLAWAH Magazine (tallawahmagazine@gmail.com) at 11:35 am