A MAN FOR ALL SEASONS: An appealing new film recalls Prof. Rex Nettleford as maverick and mentor

IT HAD TO BE HIM: Scenes from Nettleford's remarkable life in the arts.

In attempting to describe the majesty and sheer brilliance of the late Prof. Rex Nettleford, words fail a great many of us, Lennie Little-White included. But the veteran filmmaker does a fine job of drawing parallels between Nettleford's more personal side and his internationally celebrated academic life, in Long Live The King, an engrossing and wonderfully spun companion piece to an earlier work titled Renaissance Man. (Requiem/Respect Due, the very first film from 2010, completes Little-White's Rex trilogy.)

Clocking in at 55 minutes, Long Live The King traces Nettleford's roots and lifelong scholarly endeavours at the Mona Campus, where he rose to become Vice Chancellor in 1998; his home life (distinguished by a fantastic art collection and delectable meals prepared by Miss Ruby) and his immense generosity of spirit that touched the lives of countless folks from all walks, including the old man from August Town who needed a new lease on life after his beloved donkey died.

But nowhere, as the film attests, was Nettleford's impact more deeply felt than in his pioneering work as Artistic Director and co-founder of the National Dance Theatre Company (NDTC), which became his life's primary labour-of-love. And so, to an extent, the film can be viewed as a celebration of a life in dance and a peek into what made him so driven and successful. Mentor, scholar, thinker, artist, Nettleford was the quintessential Caribbean man with an eye for beauty in movement, a taste for romantic language and a genius for evoking a sense of Afro-Caribbean identity in (almost) everything he did. 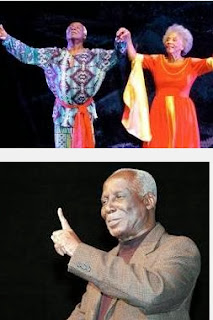 With an original score by John Williams, photo stills by Maria LaYacona, narration by Adrian Atkinson and tribute-in-poetry reading by Prof. Edward Baugh, Long Live The King also features revealing testimonials from individuals who worked closely with the great man or was associated with him in one capacity or another, namely former Prime Minister Edward Seaga, Dr. Veronica Salter, former executive assistant Eula Morgan and Lennie Little-White himself, who confesses that it was Prof. Nettleford who sparked the idea for him to start Mediamix, the very company that has now produced this film.

Like I said, Nettleford (who passed in 2010) was the quintessential Caribbean man who was in the very rewarding business of touching (and ultimately transforming lives). "We are from a royal lineage," he used to say, "No apologies for who we are." Tyrone's Verdict: A-