AND THE BAND PLAYED ON: Moods and grooves aplenty at Orrett Rhoden international festival 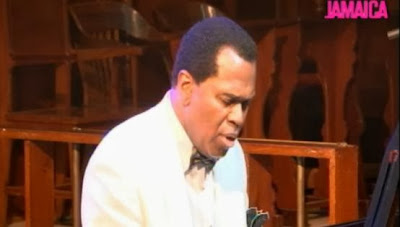 PLAY IT AGAIN: Veteran pianist Paul Shaw in action during Sunday's event at the Mona Chapel. Below, Orrett and mom Norma in happier times.

"All of the music tonight represents the wide spectrum of music I personally enjoy," Orrett Rhoden noted proudly as he announced the programme at Sunday's final night of his eponymous music festival, a free-to-the-public concert series hosted by the UWI Mona chapel. (The talk is Red Bones is the 2014 venue.)

Those who came out to support the maestro's vision of ushering the classics and other less-exalted genres (and performers!) into the proverbial mainstream were left impressed by the resourcefulness of the organizing team. The concert, under the patronage of Sir Patrick Allen, assembled a solid lineup of acts, local and foreign-based, whose musical fare ranged from easy listening to sporadically vibrant grooves and riddims -- from the Akwaaba Drummers' furious African beats paying tribute to the spirit of the ancestors to Stephen 'Cat' Coore's nostalgic suite of Jamaican standards all refreshingly interpreted on cello.

But the night arguably belonged to the lavishly talented young soprano Felicia Morrison-Williams who stole the show, making light work of Strauss' Zuelgnung and the Puccini gem O Mio Babbino Caro, made internationally popular by the late Luciano Pavarotti. What Felicia's memorable performance proved, above all else, is that this is a songbird (hailing from St. Catherine) who deserves to be better known. The standing

Also hitting golden notes: New York's instrumental ensemble DeOra, whose stint was steeped in a sense of virtuosic craftmanship, and pianist Paul Shaw, all flair and fanfare, who brought a spirited four-number set of European and island-flavoured selections to the keys. Rhoden's doppelganger sibling, Marcel, meanwhile, opted for a touch of his very own sub-genre "classi-reggae," rendering the misty original "This is a Serious Love," much to the listening pleasure of everyone.

And yet there is a sad post-script to this story, as mere days before the concert Marcel and Orrett lost their mother, Norma, to whom they dedicated their performances and the festival on a whole. Orrett couldn't have expressed the depth of the loss any more poignantly when he remarked, "She was the greatest teacher I ever had."