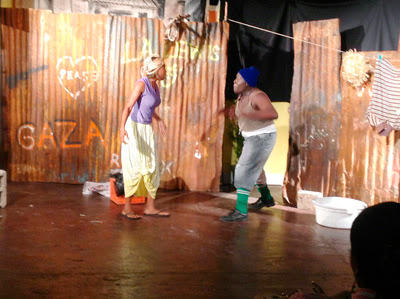 SCENE WORK: Willliams and Duncan in a moment from the play. Below, Dixon accepting Best Actor in this year's Schools' Drama Fest.

They say life is 10 percent what happens to you and 90 percent how you deal with it. This becomes a haunting reality for young Stephen Hamilton (Ardenne High's Jomo Dixon), the fledgling teenage scholar at the heart of Gaza Boyz, a harrowingly realistic yet ultimately hopeful theatrical portrait of daring to dream amidst poverty and the scourge of violent crime in the inner-city.

In spinning this occasionally funny tale set in the "raggamuffin community" of Gaza Lane and populated by two siblings at loggerheads -- the good son and the gangster (Dixon and Ricardo McFarlane); a woefully overwhelmed mother who too often looks the other way (Renae Williams); a flighty schoolgirl with raging hormones (Christene Marshall) and a gofer with the hefty appetite of an elephant (Romane Duncan), writer-director Fabian Barracks reveals a spiky gift for penning genuinely amusing comedy-drama and a keen ear for the way Jamaicans in these hard-knocks quarters talk and behave. 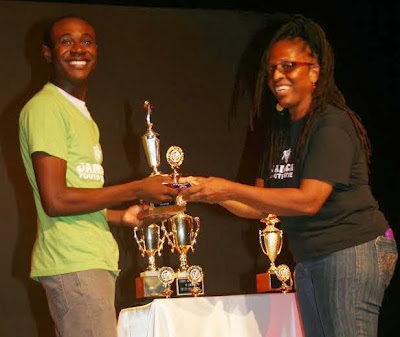 If nothing else, Gaza Boyz serves a strong vehicle for its pair of young male leads. While Dixon shines in the tailor-made role of Stephen, McFarlane renders a performance of scary authenticity as the ruthless thug Wassy too preoccupied with enforcing his reign of terror to recognize his own gradual decay.

Overall, the story is an all-too-familiar account of striving against insurmountable odds, but in spite of the play's finely honed stereotypes and the clichés that abound, Barracks is one of those writers who, thankfully, seems very interested in telling true-to-life stories that resonate and provoke thought while entertaining your socks off. Tyrone's Verdict: B