FLICK OF THE WEEK: Jason Statham takes on the whole town in slightly sluggish Homefront 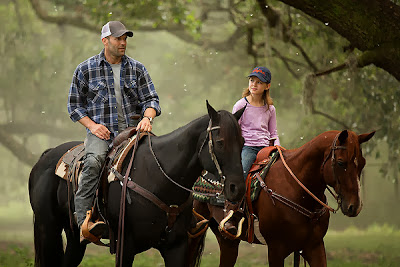 RIDE AND SHINE: Statham and Vidovic as a father-daughter duo striving for normalcy.

It's not very often you come across an ambitious action thriller that packs enough adrenaline to power a turbo machine. Then again, almost anything starring Jason Statham (The Transporter series) is bound to pack a power punch or two -- even the story leaves much to be desired.

Such is the case it turns out with this month's Homefront, a frenetic small-town saga (with a screenplay by Sylvester Stallone) populated by unruly rednecks and lost souls that, in spite of its sketchily drawn bunch of characters and a far-fetched plot, delivers a decent wallop. In short, for all its flaws, Homefront is a respectable take on the settling of old scores against sun-and-dust realism.

Statham plays Phil Broker, a retired NARC who, having lost a wife and left his job over a police operation gone terribly wrong, moves with his young daughter (Izabela Vidovic) to a remote town where, he soon learns, feuds dies hard. When his kid is lured into a fight by an overweight bully at school, it sets in motion a dangerous series of events with damning consequences.

The other-wise lovely Kate Bosworth, doing her best redneck wild woman here (the bully's cantankerous mother); James Franco, as a local rent-a-cop with a roguish streak, and Winona Ryder (his down-for-whatever chick) round out the supporting cast.

You don't have to be conversant with the finer details of the plot to know that things will turn out horribly for most. And though the action doesn't play out all that predictably, the movie still doesn't pull you into a vortex; rather, Homefront leaves you on the outside a bit dumbfounded with its steam-heat madness and rough-house sensibilities. Tyrone's Verdict: B-