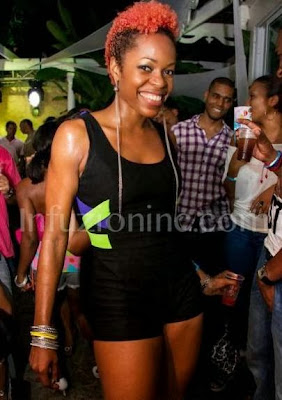 SHORT STORY: "I know next year will be a great year for me," predicts the singer, photographed at the Devonshire last July.

Why fly solo when you can tag your fab girlfriends along for the ride? Just ask Aisha Davis, the seasoned reggae-soul songstress who recently joined forces with fellow indie chanteuses Stephanie Wallace-Maxwell and Niquet Goldson for a prima-diva songfest at St. Andrew's Red bones Blues Cafe recently. Utterly intrigued by the concept, TALLAWAH caught up with Davis at the concert to get the scoop on this girl-power alliance and what the future might hold for the, as well as Davis' own solo career:

TALLAWAH: It's such a supercool idea that you and the girls opted to come together in this fashion. Have you known each other long?
Davis: Stephanie and I have known each other musically for a while. I've known Niquet for like a year or two now. We were all at Mario Evon's video launch, and Niquet suggested that we do a show together, and we agreed. But it was a joke kind of thing. But being the consummate planner that she is, the next day Stephanie was on the phone and sending emails. It was on. We were all on board from then.

You guys performed Nina Simone's "Four Women," one of the most powerful tunes ever written about struggle and survival and the Black-woman experience.
We love Nina, and the song is about four strong Black women that she sings about so powerfully. And we are three very strong Black women in our own right. So the song was only fitting.

Otherwise, what's the chemistry been like since you teamed up? Any catfights?
(Laughs)Working together is awesome. It's amazing that all of us can come together, no cussing, nobody trying to outdo anybody. We're all very supportive of each other. We hang out and we have fun. It's a wonderful vibe.

So what's next? Anything noteworthy in the pipeline to report?
I don't want to say too much, but there's something major in the works. Look out for it.

Solo-wise, I hear you've been polishing up tracks for an album.
Yes. My album should have been out this year, but it's definitely gonna drop by the first quarter of 2014. Right now I'm promoting the first single "When You Hold Me", and then we move on from there. I know next year will be a great year for me.