HOME ON THE RANGE: The good times roll, farm romance blooms in A Madea Christmas 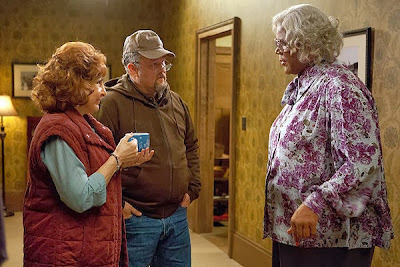 RELATIVE VALUES: Perry (left), with Najimy and Larry the Cable Guy, getting acquainted.

Madea keeps it country strong, and at the height of the holiday season to boot in A Madea Christmas, a hugely enjoyable and heartwarming family comedy that transports viewers deep into backwoods Alabama, where traditions are sacred but the living isn't always farm-fresh easy. But leave it to the world's rowdiest grandma to throw caution to the wind (never being one to hold her tongue) and bring a little good-humoured mischief into the mix.

It's arguably the feather-lightest entry in the Tyler Perry canon, but the cast is characteristically heavy on star power and conviction, even when the story takes melodramatic turns.

Veteran actress Anna Maria Horsford co-stars as Eileen, a strong-willed department store supervisor who coerces Madea into road-tripping with her to Alabama to pay a surprise visit on her daughter Lacey (Tika Sumpter), a nurturing schoolteacher who is playing house with a white farmhand named Connor (Eric Lively). Their relationship is a secret they must shield fiercely from her mom who has never been gung-ho about interracial dating, let alone involving one of her own.

Sparks fly but so do the laughs when Connor's folks (played by Kathy Najimy and Larry the Cable Guy) show up at the house, with their rapid-fire speech and rib-tickling quirks, setting in motion a chain of events examining everything from race relations to the sacrifices made in the name of family.

Chace Crawford (One Tree Hill) and Alicia Witt (The Upside of Anger) round out the roster of strong supporting players, as a struggling yet hopeful couple whose gifted young son, one of Lacey's students, exhibits the qualities of an about-to-make-it Justin Bieber, underscoring the point that you just never know what or who will turn up in a Tyler Perry flick. Tyrone's Verdict: B