INTO THE WOODS: The Golden Macca Fat, a zesty blend of eco-consciousness and high-energy fervour 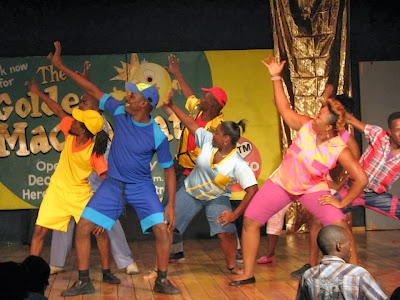 DO THE WAVE: Members of the Pantomime Company performing a scene from the musical.

It's a reaffirmation of theatre's enduring tendency to astonish when issues like environmental activism can wind their way into a production like the LTM's National Pantomime. True, the bounty of Mother Nature and refreshing slices of Jamaican life usually figure prominently into the plot, but this go-round one senses a deeper appreciation for the birds and the bees that echoes a commitment to social responsibility through the performing arts.

The likes of busybody Supe the Traffic Cop (Kevin Halstead) and the Shakespeare-quoting Miss Pengelleng (Faith Bucknor) aside, the most appealing character in The Golden Macca Fat is a determined young eco-warrior named Pointsettia (Juneau Williams), who sees it as her duty to champion the protection of endangered flora and fauna, including Pattoo (Yenique Hines), alongside her community leader mom, the Minister of Everything (an engaging Sharon Edwards), who is bent on safeguarding the community of Macca Fat Mountain from predators of all guises.

And that most def includes the shady out-of-the-blue invest-ior Charlie Prosperity Hardtime (Ray Jarrett) and his pair of "hadministration hassistants," who have set their sights on acquiring the elusive golden macca fat, a dual symbol of hope and source of pride for the residents.

The acting performances and the play itself run low on emotional heft, but with some infectiously catchy musical numbers ("We Nuh Beggy-Beggy" a bonafide highlight), lively choreography and a hyper-vivid cross-section among costumes, lighting and a set design of exemplary craftmanship, the show is high-energy family entertainment.

Above all, The Golden Macca Fat bears testament to the long-standing appeal of veteran playwright Barbara Gloudon's writing (imbued with a zesty mix of Jamaican humour and irrepressible community spirit) and the sure-footed direction of Panto debutante Pierre LeMaire. Tyrone's Verdict: B