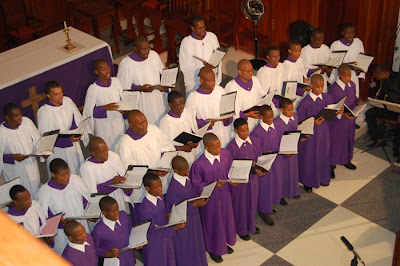 With a quartet of powerful guest soloists and accompanied by an up-to-the-task eight-piece orchestra (Paulette Bellamy on violin included), the Kingston College Chapel Choir delivered a superb 2013 concert season recently at the UWI Mona Chapel, chiefly marked by a fluent interpretation of Handel's vision for chorus and solos (in The Messiah) that compellingly satisfied my view that the choir is still a titan among choral groups of its kind in Jamaica.

For the most part, veteran tenor John McFarlane proved that after all these years he's still in solid shape vocally. Rising coloratura soprano Danielle Watson (who regularly performs with Nexus) gave a pretty respectable account of her maturing gifts. Bass Byron Bellamy, who sang with the choir back in the '50s, made what can be chalked up to a memorable post-retirement return.

But I simply must single out for special kudos the intriguing mezzo-soprano Raehann Bryce-Davis, possessed of awe-inspring vocal dexterity and a passionate delivery technique which made her performance all the more dazzling during her recitational take on such pieces as "But Who May Abide His Coming?" The singer is currently a Florida Grant Opera Young Artist and an Aspen Music Fellowship Artist, and the class and pedigree truly shows.

Without the faintest doubt, the KC chaps had the Mona audience in their thrall with memorable renditions of, especialy, "And He Shall Purify" and the robust "His Yoke Is Easy." For those who know, Handel's Messiah is one of the most demanding oratorios in the classical canon., and to say the performers did it justice would only be modest commendation.

As for the remainder of the two-hour-plus concert, the highlights proved quite numerous. Among the standouts: a soulful, profound treatment of "Come Emmanuel Come"; a brisk and lively take on "Masters In This Hall"; and sprightly rendition of "Calypso Carol" -- not to mention the effortlessly undulating strains of "Sleep Judea Fair." Grub Cooper's "Glory Hallelujah" and the Mexican lullaby "El Roro" wonderfully showed off the choir's distinctive blend of trebles, altos, tenors and baritones. But hats off to the tenors, in particular, who gave the concert it's central melismatic jolt.