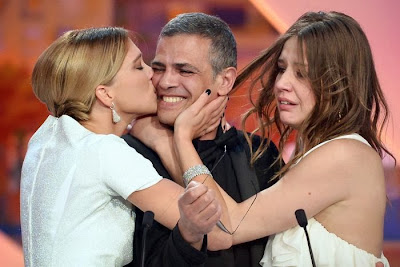 TRIPLE THREAT: Seydoux, with director Abdellatif Kechiche and co-star Adele Exarchopoulous celebrating their big win at Cannes in May.

According to a 2011 poll, old white men account for the majority of voters who select the winners of the annual Academy Awards. So one can't help but wonder: were these old timers turned off by the adult content (a little girl-on-girl action) in Blue Is The Warmest Colour, hence its absence from the list of shortlisted films being considered for January's Oscar nominations?

The critically heralded Blue, about the manic highs and depressing lows of a young lesbian romance, was the most garlanded -- and daring -- film at this year's Cannes Film Festival, picking up the prestigious Palm D'Or and a performance prize for actress Lea Seydoux. 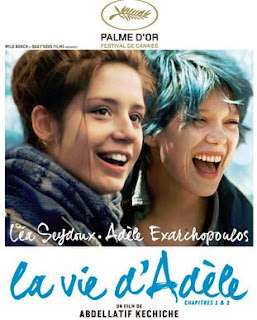 Though it was highly fancied to now represent France at the Oscars (and possibly win) alas, that shall not come to pass. Much of the same can be said of The Past, another of the year's best-reviewed outside-the-box films, by A Separation's Asghar Farhadi, which has also been surprisingly snubbed.

But one of these eight countries will bag the golden statuette come March 2:
The Broken Circle (Belgium)
An Episode In The Life of an Irish Picker (Bosnia)
The Missing Picture (Cambodia)
The Hunt (Denmark)
Two Lives (Germany)
The Grandmaster (Hong Kong)
The Notebook (Hungary)
The Great Bounty (Italy)