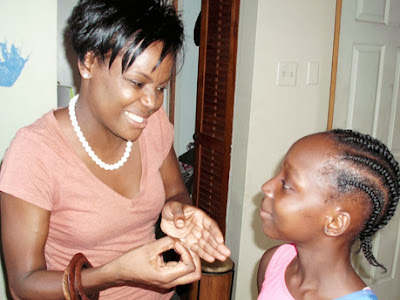 JUST THE TWO OF US: Maye, having a moment with daughter Jahzan, a budding actress herself. Below, with co-stars in 2011's Stop Dat Train.

Though she's an actress who relishes nothing more than disappearing into well-drawn characters crafted by playwrights as prolific and provocative as Basil Dawkins and Aston Cooke, Zandriann Maye has no qualms about putting her own real-life story out there, before the viewing public. In fact, Maye (an aspiring playwright) says she feels an enormous sense of responsibility and relief in sharing her personal trials-and-triumphs tale with other young women, particularly those grappling with the myriad challenges attendant to single motherhood.

Hence the creation of the autobiographical When One Door Closes, which played to fair-sized crowds at the Pantry back in 2011. "I needed to heal. I needed to let other women who found themselves in similar situations recognize that there's a way out," Maye says of the inspiration that gave birth to the piece. "I wanted to show that you can let what was meant to be your downfall be what lifts you up."

For the past two-plus years she's largely been off the radar but, as she explains, she's been kept extremely busy training and nurturing primary-school talents for national performing-arts competitions. The bright and multi-award-winning tween Jahzan McLaughlin (her daughter) is a fine example of the products emerging from the Maye school. 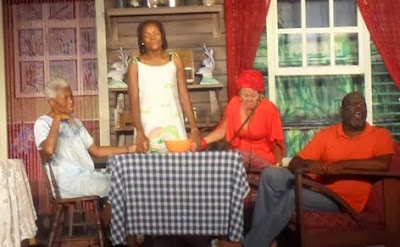 Now, at 35, Zandriann (who snagged an Actor Boy in 2009 for Cooke's Jamaica 2 Rahtid sequel) has landed the plum comeback role of sparkplug Molly in Dawkins' silver-medal-winning My God Don't Wear Pajamas, premiering this end-of-month at the Little Little Theatre. "I go through deep emotions in certain scenes," confesses the actress, known for her vivacious stage presence, "and I just like doing it because it's so much fun."

With castmates including such exquisite stars as Ruth HoShing and Jean-Paul Menou (under the guidance of Douglas Prout), Maye couldn't want for better company. Still, it's getting to reunite with Dawkins, who gave her a star-making role in 2005's Hot Spot, that she seems most enthusiastic about. "Uncle Basil has always been one of those in theatre taking care of me," she tells me. "It's awesome working with him; he just has an amazing cool. You get taken care of, and it makes me feel that I am appreciated."