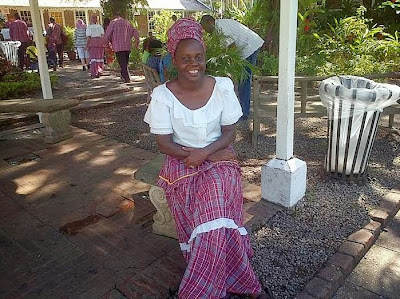 REST ASSURED: "They say life begins at 40, but it's really a point where you stop and take stock," says Lewis, with a pair of her law students below.

Clint Eastwood once said, "The moment you begin to feel complacent, it's time to shake things up." Coleen Lewis is living it. Currently on hiatus from live theatre, the multi-hyphenate is busy exploring her other passions these days, giving serious attention to her love of the law, teaching and academic research. But, as TALLAWAH discovers, all that juggling hasn't dimmed her yen for regularly tuning up with the Jamaican Folk Singers.

TALLAWAH: Coleen, I haven't seen you on stage in ages. What's the latest?
Lewis: I've been lecturing full-time in law at UWI since 2010. I'm now based at the Montego Bay campus. I had to come to the realization that it would be difficult for me to continue in theatre the way that I would like to and, at the same time, do a law practice and also lecture at the university and do my research.

Did your turning the big 4-0 also influence your decision to switch things up a bit?
Absolutely. I was reaching one of those ages (Laughs). They say life begins at 40, but for me it's really a point where you stop and take stock and reflect on where you are, the things you want to do and what you really need to be focussing on.

I don't doubt that you're still madly passionate about the dramatic arts.
I love the theatre. I still attend all the plays whenever I am in Kingston. I try to support as many of the shows as possible.

With works like the comedy revues RRR! and Ah Soh It Go already in the can, what do you think your next effort as a playwright will be about?
I'm not sure, but I like the genre of revues because you get to see such interesting themes coming out. So I'd probably do another revue.

For the past two-plus years you've been getting your groove on with the Jamaican Folk Singers. What's it like being a part of such a celebrated chorus?
It brings joy to my soul, my being. Most times when you see me up there performing I'm smiling because I'm so happy. There's just something about it I can't explain.

And then there's the magic and majesty of Dr. Olive Lewin that still lingers.
She should be one of our national heroes. There should be a movement to make her a national hero. She went across the island and collected folk songs and other forms of traditional music. And right across Jamaica the schoolchildren are singing them and learning about our culture. That legacy ought to be preserved.