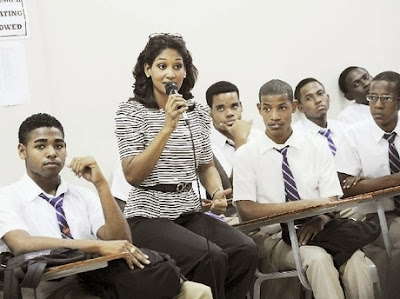 BOYS' CLUB: Hanna and her team stepping up efforts to brighten the future for J'can youth.

"It's a revolution we're trying to push, so Youth Month this year was positioned as a launch for a whole new series of activities," the youth ministry's Gregory Simms dishes to TALLAWAH at the Bank of Jamaica's recent Lunch Hour Concert, discussing the shake-up in progress, as Minister Lisa Hanna and her on-the-job team step up efforts aimed at brightening the future for Jamaican youth.

"The minister spent a lot of time this year doing groundwork by going around the island for some pon-di-corner reasonings. The feedback we received from the youngsters is what we're using to move forward with our plans."

Moving forward, Simms goes on to explain, also means strategically trying new things, embracing fresh concepts and, in some respects, making the old feel entirely new again. "Next year, for example, the grand Jamaican Youth In Concert is coming back. So all of our activities now is like a precursor leading up to that," he points out. "Now that we have the data, we're gearing up to bring all those events and more to reality to have a big impact in 2014. You'll be seeing and hearing a lot more from us."

The theme for this year's Youth Month (November 2013) was, quite aptly, "Reset Di Ting."