SCHOOL DAZE: Delcita hits the books -- and the romance jackpot -- in latest outing 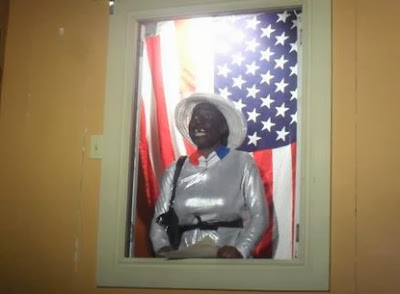 LEADING LADY: Wright, as the titular heroine brings the funny in this season's University of Delcita.

Talk about an education. On her latest misadventures tour, Delcita Colwater is in pursuit of higher learning, making her way through the hallowed walls of a local university to read for a degree in Guidance & Counselling. Of course, she encounters significant hurdles to say the least, including a mind-boggling curriculum, an uptight lecturer and steep financial difficulties, to cite only a few. But, as Delcita makes abundantly clear, recalling The Colour Purple's Miss Sofia, all her life she's had to fight.

The script, co-penned by Wright and longtime collaborator Paul Beale is a rather lengthy enterprise, which at times side-steps logic in favour of scoring extra laughs. But, you can't deny that the events, as depicted in this two-hour-plus play, are frequently humorously resonant slices of Jamaican life.

The colourful cast, working with the fairly new Pantry Tree-House Theatre for the first time (so a lot has to be overlooked) include Natalee Cole (as the icy Nikki Tamora) last seen in Glass Slippaz; Patrick Bailey (Delcita's loud-mouthed old man, Zacky) and young Dreanna Williams, Wright's real-life daughter who portrays her precocious on-stage kid.

And speaking of parenthood, the struggles of single motherhood, for the record, also happen to be the most keenly addressed issue in the production. And a bit of romance gets thrown into the mix, thanks to our renegade heroine's affair (by phone, at least) with the unseen and mischievous David.

So, in the end, the demands of the role force Wright to reveal a range and maturity she hasn't exhibited before, proving that in matters of art and, indeed, existence, you just never know where life will take you. And, even more to the point, how it will challenge and change you for the better. Tyrone's Verdict: B