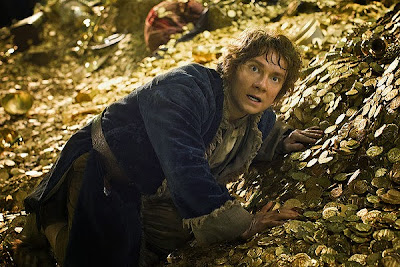 GOLDEN AGE: Freeman is back as the titular journeyman in Jackson's latest epic saga.

Taking in an epic blockbuster about honour and a days-long odyssey, it helps that the cinematography and music are up to the task to make the hours tolerable. With the Oscar-winning The Lord of the Rings trilogy, director Peter Jackson showcased a deft touch in this regard. He takes similar and gratifying creative risks with The Hobbit (the latest instalment, The Desolation of Smaug, now showing on the Palace Cinemas circuit), filling the screen with nothing short of visual spectacle, complete with jaw-dropping landscapes and an opulent palette.

Then there are sharp little turns from his actors, led by the magisterial Sir Ian McKellen as the sage wizard Gandalf. Martin Freeman, meantime, is all pint-sized fervour as the titular ring-bearer Bilbo Baggins, while Richard Armitage reprises his tailor-made role of the heroic kingpin Thorin, who is leading his fellow dwarves on a quest to reclaim their long-lost kingdom, lending the plot its primary focus.

So, Smaug, which picks up right where the first left off, can be described as a tale about reclaiming what's rightfully yours and how doing so can mean risking unimaginable peril and journeying to the ends of Middle Earth to battle no less than a fire-breathing beast (voiced exquisitely by Benedict Cumberbatch), monstrous orcs and take-no-mess elves, led by Orlando Bloom and Evangeline Lilly.

Based on the JRR Tolkien masterpiece, the film is a bit thin on the meat (the story, after all, is being spread over three films), but with its allure and majesty and potent original score it casts and enchanting spell that only goes to show that Jackson and his merry gang of creative souls haven't lost their sense of adventure or whimsy nor that requisite magic touch. Tyrone's Verdict: B