TO TELL THE TRUTH: The Fifth Estate is a probing, fairly satisfying look at Assange and the Wikileaks phenomenon 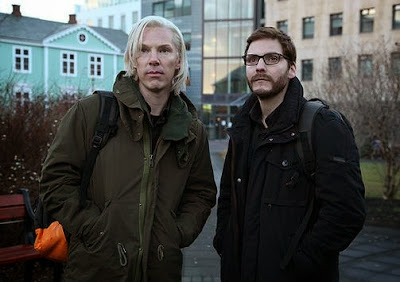 GAME CHANGERS: Assange (Cumberbatch) and Berg (Brühl) are men on a mission.

"Revolution is a struggle between the past and the future, and the future has just begun," declares Julian Assange (rivetingly portrayed by Britain's Benedict Cumberbatch) in The Fifth Estate, a searing and intense biopic that sheds some serious light on the genesis and inevitable comedown of the Wikileaks phenom and its founder.

The opening quote is one of the most telling utterances from this cerebral yet ego-driven whistleblower who, as we should all know by now, came to international prominence last year in the wake of a succession of scandals stemming from his controversial website's publishing of classified information threatening to topple powerful governments and their leaders.

From the outset, Wikileaks staked its claim as a virtual vessel intent on providing a great service: exposing corruption and abasing roguish high-profile wrongdoers who need to be taught a lesson. But, as the film highlights, where does one draw the line? The Fifth Estate, for all its noble efforts, glosses over much of Assange's journey (particularly his early years) which would have lent the story a firmer footing.

Even so, director Bill Condon (Dreamgirls, Twilight) sketches a starkly compelling portrait of the visionary and his mystique. And Cumberbatch, who gave one of the year's most spectacular turns (in Star Trek) loses himself in the part, convincingly bringing out Assange's mix of steely resolve and petulance.

"You can change the world, but you can't do it alone," he tells a keenly attentive audience during a lecture, "you need people willing to put themselves on the line." As such, he found his loyal second-in-command and confidant in Daniel Berg (Daniel Brühl ), whom he both cherished and terrorized. Incidentally, Berg penned the book on which the movie is based.

So in the end, The Fifth Estate is really about two things: just how will history judge Julian Assange -- and journalism's (in all its varied guises) ultimate quest for truth and credibility. Tyrone's Verdict: B