WHAT'S NEXT FOR TESSANNE? A classy debut for Universal, working with the likes of Ryan Tedder 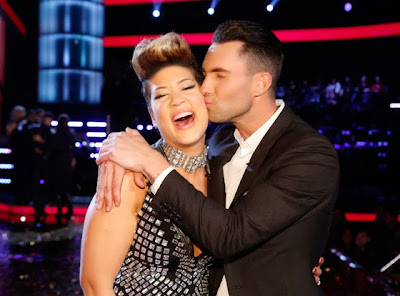 HAVING HER MOMENT: The songbird gets a congratulatory peck on the cheek from coach-mentor Adam Levine. With her trophy, below.

Even as she continues to count her blessings and complete a victory lap in the wake of her groundbreaking win on the American singing competition The Voice, Jamaican sensation Tessanne Chin has already set her sights on delivering a classic and classy 2014 debut for Universal Records, her new label.

For Chin, that's primarily what winning the contest is about. "It means I get the opportunity to start my international career, and that's what I've always dreamed about," she confides to USA Today. "And it means I get to record an album and go out there with music not just to represent my country but to represent anybody who has a dream, to let them know it can be done." 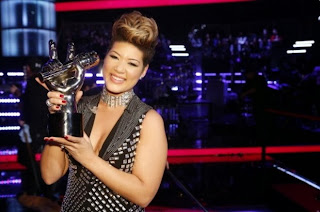 As for collaborations, she's already struck gold, given her recent creative partnership with One Republic frontman Ryan Tedder, with whom she co-wrote her new single, "Tumbling Down." "I'm excited to be able to make some amazing music," she tells EW, "and finally be able to make an album that I know I'm going to be proud of." (For the record, here at TALLAWAH, we can't wait to hear it.)

Speaking with Irie FM the other night, Shaggy, who is credited with encouraging Tessanne to audition for The Voice, said he always knew she had the goods to go all the way in such a setting. "I knew she had what it took to compete on an international circuit on this type of programme," he said. "From voice talent to personality, she's a winner and I'm proud."