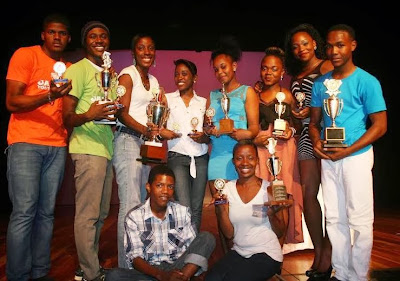 WINNERS' EDGE: The Best Production awardees gather for a group photo inside the Little Theatre.

On the strength of their entry The Ties That Bind, Bridgeport High's youthfully energetic performing arts ensemble copped the lion's share of awards (a total of four), including the highly coveted Best Production Prize, at Saturday's presentation of trophies to bring the curtains down on this year's Schools' Drama Festival.

Ahead of the awards, the Jamaica Youth Theatre offered a preview of their spirited mini production, Wi Love Wi Self, set to thrill judges at this month's Caribbean Schools' Drama Fest in Barbados.

At Saturday's event, Akeem Mignott emceed the proceedings, Quindell Ferguson did the honours as trophy mistress, Aston Cooke assumed the role of chief photographer, while the fair-sized Little Theatre audience cheered and hooted as the winners were given their due.