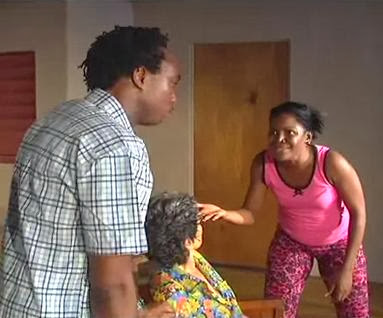 MAKING A SCENE: Castmates Anderson, Nicholson and Maye get in on the action.

Don't be fooled by the title. Basil Dawkins' newest effort, My God Don't Wear Pajamas is a lacerating, occasionally disturbing window into the hearts and minds of four desperate and wounded souls whose motivation rests very much on their immense believability. Dawkins has always had a sharp eye for the neuroses of lost causes and for bringing out uncharted depths in his exploration of family dynamics. With this new play, he scores yet another home run, memorable in more ways than one, but thanks mainly to deft direction by Douglas Prout and a first-rate cast led by a terrific Donald 'Iceman' Anderson.

Anderson is Denver Jenkins, a beleaguered reformed convict now living in Kingston and doing his best to lead an upstanding Christian life (he runs a prison ministry), even as he grapples with a boisterous and domineering on-again off-again wife (Zandriann Maye, excellent) and a scheming Florida-based stepmother, Sharon (Hilary Nicholson), who soon approaches Denver with a plan to inherit his dead father's legacy by marrying her, among other sordid suggestions. (Like I said, Basil spares no punches with this one.)

Jean-Paul Menou, meantime, is the potential party-spoiler as Sharon's unhinged son, Bradley, a sad blend of entitlement and hysterics. As could be expected, things grow intensely heated, but the prolific playwright, who won a silver medal for the script, knows how to skilfully leaven the dramatic intensity against moments that sing with genuine and light-hearted humour.

Bringing Dawkins' vision to the stage is frequent collaborator Douglas Prout (For Better or Worse, Where Is My Father?), one of the most sought-after directors in the game, who manages to imbue the complex story with spirited life while eliciting strong performances from all four actors. Maye, in particular, has never been better.

My God Don't Wear Pajamas (boasting an elegant set design) may be about relatives at each others' throats over a dead man's legacy (and a welcome reminder that His eye is on the sparrow), but it also speaks directly to our age of political greed and corruption, the blessing-and-cure duality of family and that old-fashioned sentiment that true love, indeed, conquers all. Tyrone's Verdict: B+