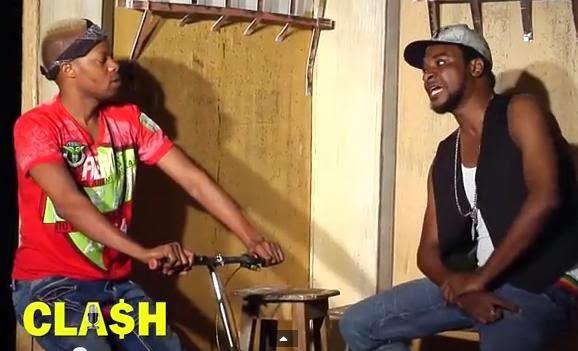 RHYME AND REASON: Ramsey and Williams in a scene from the new roots comedy.

You can say that on every street corner in Kingston (and elsewhere in JA for that matter) one can find an aspiring singjay or two, eyeing a shot at stardom. Community talent shows regularly provide a medium for them to showcase their creativity, and chances are someone of influence, with the clout to make things happen, will be in attendance, witness the performance and hand over a business card.

Much of that sequence plays out quite similarly in David Tulloch's Clash, a loud (the title speaks volumes) but intermittently funny musical comedy about showbiz dreams, back-stabbing and the life-altering import of rising to the occasion.

Keith 'Shebada' Ramsey, playing an artist manager named Ravers, is billed as the play's headliner, but the story is really about Junior Williams' character Higher Heights, a talented young singer and dreamer whose "buss" single of the same name earns him a bit of fame and a chance encounter with a domineering businessman, Rabbadon (Volier Johnson), who takes him under his wing, leaving Ravers high and dry.

So little wonder, there's a lot of score-settling in the mix and the whole thing culminates in a battle-of-the-sexes showdown between Higher Heights and Ravers' sparkling new protege Gabby, whose pops (Garfield Reid), a miserable plaza owner, won't be winning any Father-of-the-Year accolades anytime soon.

As with broad humour comedies that tend to fall under the roots play banner, Clash (directed by Granny Rule's Paul Beale) is deliberately overlong and peppered with bassolect dialogue to cater to its particular demographic. Consequently, it's largely devoid of wit and genuine hilarity. But, truth be told, it earns decent points for its vigorous attempt at opening a theatrical window into the modern Jamaican dancehall space while spotlighting the struggles of talented hopefuls desperate to catch a break. Tyrone's Verdict: B-