BOOK OF THE MOMENT: Ishmael Beah returns to bookstores with dazzling fiction debut 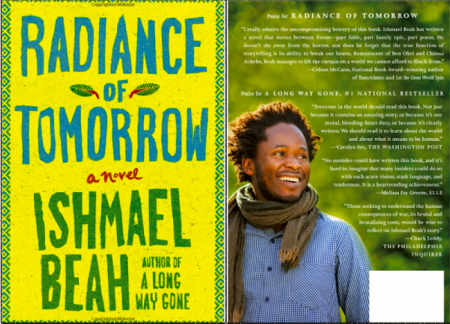 OUT OF AFRICA: The emerging writer delivers a solid follow-up to his acclaimed memoir.

Almost a decade after astonishing readers with his vivid and wildly spellbinding memoir A Long Way Gone, a first-hand account of the horrific experiences of child soldiers in his native Sierra Leone, Ishmael Beah has returned to wow us anew with his debut work of fiction, Radiance of Tomorrow, which delves into what happens when the survivors of war return home.

At a reasonable 256 pages, the novel (published this month by Sarah Crichton Books) is already finding favour with esteemed critics, notable and established writers among them. Reviewing for Publishers Weekly, Edwidge Danticat (Breath, Eyes, Memory) glowingly calls it "a formidable and memorable novel....a story of resilience, survival and ultimately rebirth."

Extra credit to its potency, Radiance of Tomorrow is Amazon.com's Best Book of the Month pick (January 2014). "Everyone in the world should read this book not because it contains an amazing story or because it's our moral bleeding-heart duty, or because it's clearly written," proclaims the Washington Post. "We should read it to learn about the world and what it means to be human."

According to Time, the real appeal of Radiance, and indeed A Long Way Gone), rests on its candour. "It's a breathtaking and unselfpitying account of how a gentle spirit survives a childhood from which all innocence has been sucked out.... a truly riveting [work]."

>> ALSO CHECK OUT: OTHER JANUARY RELEASES
- The Wind Is Not a River by Brian Payton
- Windfall: The Booming Business of Global Warming by McKenzie Funke

Posted by TALLAWAH Magazine (tallawahmagazine@gmail.com) at 10:43 am

Email ThisBlogThis!Share to TwitterShare to FacebookShare to Pinterest
Labels: Book of the Moment, Buzz on Books, Hot Picks, Ishmael Beah