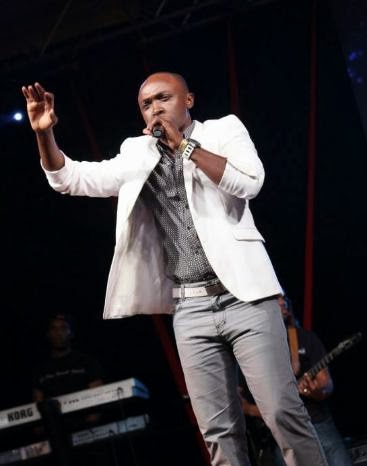 IN TUNE: Downswell delivering a solid set at the January 1 concert.

"I think it's one of the greatest events that could ever happen to start off the New Year," exclaims Judy Mowatt, referring to the New Year's Day extravaganza First Fest, which she recently co-headlined along with such crowd-pleasing ministers as Kevin Downswell, Prodigal Son, Goddy Goddy, Ryan Mark, DJ Nicholas and a back-on-the-radar Stitchie. "And I'd like to see something like this continue for the years to come," she added.

Given the show's outstanding production value and a series of jubilant performances that regularly whipped the Jamaica College into rag-waving, foot-stomping frenzy, I think staying power is a potential achievement for the production team, headed by the dynamic Markland Edwards, with time (and adequate sponsorship).

Rocking out centrestage, meanwhile, the acts gave highly respectable accounts of their passion for the word, some sets steeped in rousing praise-dance excitement, a few others mired in an introspective and prayerful daze. Kevin Downswell's stint easily lands in the latter category, with riveting renditions of crowd favourites such as "Close to You" and "Running", before closing with a rip-roaring take on his megahit "Stronger."

George Banton took them to the old school with classic cuts like "I'm Next In Line"; Joan Flemmings reintroduced fans to such potent tunes as "All Christian People"; Jermaine Edwards delivered a brisk set marked by his brand of island worship, while DJ Nicholas and Ryan Mark, two beloved veterans of the reggae gospel game, managed to raise the electric quotient as the party pulsed well into the night.