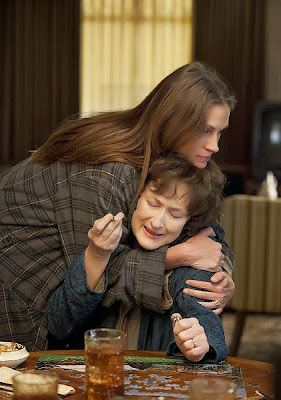 There is so much powerhouse acting going on in August: Osage County that the extravagance at times feels a bit overwhelming. But you really don't mind, given that the pedigree of actors and the film's source material are unequivocally first-rate.

Based on the Pulitzer-winning play by Tracy Letts, who delivers a knockout screenplay version here, August is best described as a supersized wallop of family dysfunction, rage and unrequited love, centred on the Oklahoma-based Weston family, whose matriarch, Violet (Meryl Streep) is a bawdy spitfire whose mouth cancer and prescription-pill overdosing do very little to quell the barbs and missives that she aims at everyone in sight, including her hapless writer husband, Beverley (Sam Shepard), whose eventual disappearance brings the whole clan together.

It's quite an interesting bunch, to say the very least. Julia Roberts, in an Oscar-worthy performance, assumes most of the heavy lifting as Barbara, the eldest of the Weston girls; the other two portrayed by Juliette Lewis (featherweight Karen) and Julianne Nicholson (matronly Ivy), a frequent target of Violet's "truth-telling."

Ewan McGregor is Barbara's estranged husband, Bill. Abigail Breslin, all grown up since her precocious debut at age eight in Little Miss Sunshine, plays their wilful daughter, Jean. Chris Cooper lends grace and decency to the mix as Charles Aiken, alongside Margo Martindale, who is in sassy form as wife Mattie Fae. Benedict Cumberbatch is their feckless son, Little Charles.

The fiercely dramatic performances (skilfully moderated by director John Wells) coupled with Letts' wit and razor-sharp observations of life in the American midwest, go a long way in making August: Osage County one of the most potently captivating ensemble dramas you'll see this season. Tyrone's Verdict: A-