IN THE MIX: Culture and entertainment headlines from Kingston to Cannes 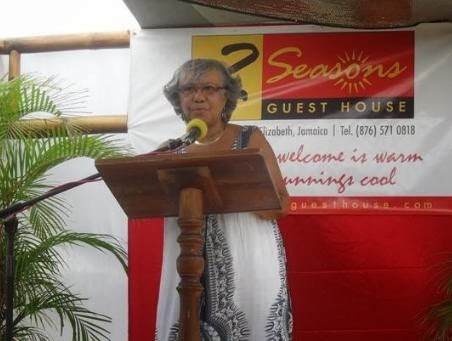 WORDS TO LIVE BY: It's rapidly securing its place as a sister festival to Calabash (May 30-June1), but this year the Talking Trees Lit Fiesta is trading the cool Southern hospitality of Treasure Beach for the warm hustle-and-bustle of city Kingston. According to organizers, the Kingston edition will take place at the University of Technology (Lilian's, to be more specific) on Sunday, Feb. 16, and featuring, like Calabash, an accomplished lineup of literary talents, both Jamaican and foreign-based. Poised to make his second appearance at the annual event, Nigerian prize-winning author Igoni Barrett will read from, among other notable publications, his latest work Love is Power of Something Like That. Also in the mix this year: Dutch journalist Femke Van Zeijl, as well as a Jamaican contingent comprising such names as musicologist Jo-Ann Richards, Dr. Nova Gordon Bell, Ruddy Wallace and poets Ann-Margaret Lim and Marlon Thompson. (Above: Sonia King reading at the festival in 2011.)
**

FUTURE LEADERS: Close to 100 outstanding young Jamaicans are set to receive the Prime Minister's Youth Award for Excellence in the usual range of disciplines, spanning academics and entrepreneurship, sports and the performing arts. Customarily held around November/December to coincide with Youth Month, the 2014 edition (details forthcoming) will be staged in March, signalling the youth and culture ministry's continued mission to "Reset Di Ting."
**

TOP JOB: There's a new sheriff in town. Legendary businessman R. Danny Williams has been appointed Chairman of the Jamaica Anti-Doping Commission (JADCO), Information minister Sandrea Falconer has announced. Williams, who was conferred with an honorary doctorate by the University of the West Indies (UWI) last November, will lead a newly assembled team to replace the old one that resigned en bloc last year. The new JADCO board is made up of Carmen Tipling, Dr. Patricia Holness, Anthony Lawrence, Dr. Thelma Nelson, Dennis Lalor, Neville Williams and Dr. Winston Isles. An additional pair of board members will be named in short order.
**

CINEMA VERITE: As TALLAWAH previously reported, The Piano's Oscar-winning director Jane Campion will chair the Cannes Film Festival jury at this year's even slated for May 14-25 in France. Now word comes that the Nicole Kidman-starring vehicle Grace of Monaco is set to open the festival. The film, produced by the Weinstein Company, centred on the life of Grace Kelly (Kidman), costars Tim Roth, Paz Vega and Frank Langella.