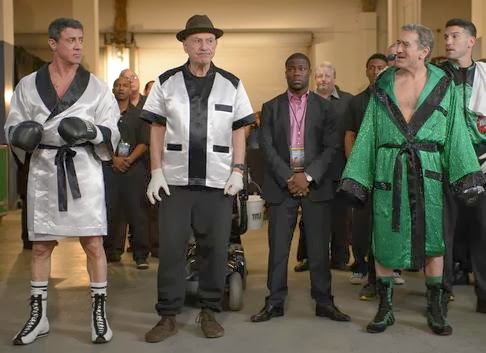 Though it's no heavyweight piece of film-making, Grudge Match, about two old boxing rivals returning to the ring to settle the score, is a hilarious, occasionally heartfelt ode to aging, legacy (of the familial and sporting varieties) and not taking oneself too seriously.

As the story goes, nearly 40 years ago, famed pugilists Billy 'The Kid' McDonnen (Robert DeNiro) and Henry 'Razor' Sharp (Sylvester Stallone) ended their infamous last clash in a draw, a result that never satisfied the win-by-any-means McDonnen, who's been foaming at the mouth for a rematch ever since. Sharp, on the other hand, couldn't care less, leaving boxing to work at a mining factory. So while McDonnen went on to establish a lucrative car dealership, Sharp settled for a modest bachelor pad, swimming in past-due bills. Enter Dante Slate Jr (Kevin Hart), a sly second-generation boxing promoter who approaches the two Pittsburgh legends with a handsomely paying deal to give their still-loyal fans one last hurrah.

For me, the film's core appeal lies in watching DeNiro and Stallone, two of Hollywood's most respected elder statesmen, prepare for and promote the epic showdown (dubbed Grudgement Day): slugging it at the gym, warbling the Star-Spangled Banner at a motocross event, and getting into heated brawls in the run-up to fight night. In the end, the veteran actors imbue their characters with immense believability.

Grudge Match, directed by Peter Segal, joins such movies as Red and The Expendables as silly-serious vehicles featuring old-timers behaving badly. For DeNiro and Stallone, however, it's clearly about being as old as they feel -- and having a swell time at this ripe stage of their illustrious careers. Tyrone's Verdict: B