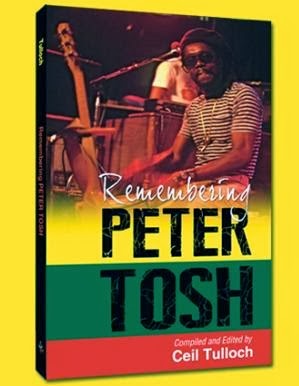 HIS STORY: A legend of Jamaican music gets his literary due.

Complex figures tend to make for engrossing literary fare, and no Jamaican icon (musical or otherwise) has gone down in history as more complex and controversial than Grammy-winning legend Peter Tosh, whose eventful life and legacy is the subject of roots-reggae devotee Ceil Tulloch's retrospective, Remembering Peter Tosh (Ian Randle Publishers).

At under 140 pages, it's a slim volume (with too simple a title, I should add) but, in addition to rare and vibrant photographs, it packs a series of compelling remembrances of a man and his mystique on and off the stage; a reggae superstar who clearly had his vices but who many felt was simply a complicated, misunderstood genius.

Tulloch did an excellent job in pulling together an estimable cast of contributors, most of whom worked closely with Tosh in one capacity or another. But I feel readers will be particularly interested in Dr. Omar Davies' articulate account of the Tosh he admired and, by his own admission, speculated about. "My wife and I both admired Tosh because of his music, as well as the fact that he was such an exciting performer. One wouldn't know what to expect. He would ride his unicycle on stage, wear unique outfits etc," Davies writes, before emphasizing that he found Tosh's liberal use of expletives to be quite off-putting. "I suspected that Tosh saw it as his duty to take on the society, and he objected to the notion that a set of meaningless words, ordained by the colonial establishment as 'bad' should continue to be judged to be unlawful."

It is this kind of radical and rebellious streak that largely informed the fond recollections of people like photographer Chuck Krall. "My favourite images of Peter are the ones of him smoking herb, sometimes right in front of the audience, or rolling his spliff. He made the biggest spliffs," Krall recalls. "I am fond of those pictures because they were so intimate and reminded me of special moments."

His candour and staggering creativity aside, Tosh also emerges as a fun-loving individual and a man capable of enormous generosity. "What struck me most about him was his deadly serious demeanour in public," remembers noted historian Roger Steffens, "but privately, he was a warm and humourous person. You always laughed around him." Filmmaker and Montana State University professor Doug Wendt echoes similar memories. "Peter was very brave and talented. He was relentlessly determined to speak the truth, despite the repercussions," Wendt says. "Once I got to know Peter well, I discovered that beneath his often stern and militant demeanour, he was actually a very gentle giant."