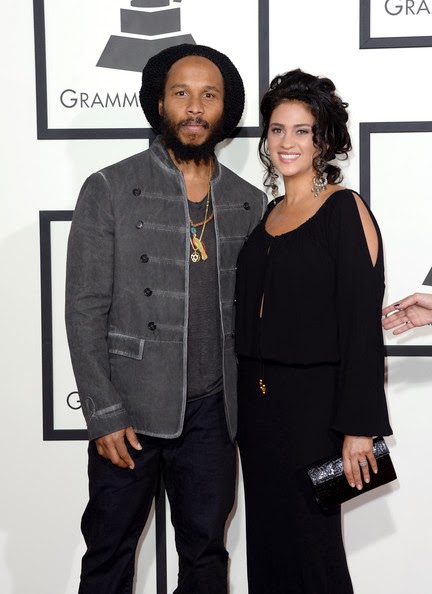 TALENTED PAIR: The gorgeous couple posed for photographers ahead of the show.

On Sunday, Ziggy Marley walked the red carpet at the Grammy Awards (hosted by the Staples Centre in Los Angeles) with his stunning wife, Orly, Agai, providing picture-perfect arm candy. But by the end of the evening, the 43-year-old reggae superstar was heading home with another shiny accessory: the award for Best Reggae Album, for his critically praised disc, Live in Concert (Tuff Gong Worldwide). The win represents Ziggy's fifth lien on a golden gramophone, music's highest honour, and reflects the Recording Academy's continued admiration of the Marley brand of craftmanship and lyrical potency.

Never mind that he's no Grammy ingenue, Ziggy (Love Is My Religion, Wild and Free) confesses that this latest nomination caught him completely by surprise. "It was unexpected. I wasn't thinking about it. I was surprised," he told CBS News ahead of the pre-show telecast. He went on to disclose that the idea to drop a live album hit while on tour with his band. "I liked the way it sounded," he said of the finished product. "We put it out quietly and simply, and now we got a Grammy nomination, so that's good."