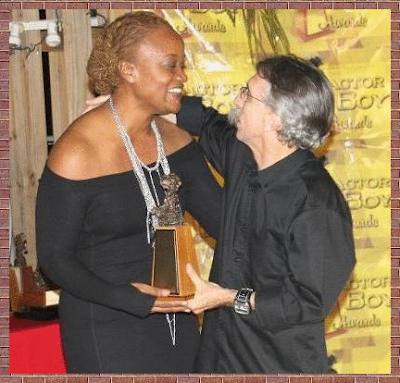 TWO OF A KIND: LeMaire presenting the Best Supporting Actress award to Nadean Rawlins at the 2012 Actor Boy Awards in Kingston.

When Pierre LeMaire arrived in Kingston from his native France in the mid-seventies, it didn't take him long to see that Jamaica was his new home away from home. "I was sent here by the French government on a one-year contract to work with the French embassy," he tells TALLAWAH, "and I decided that I was not going back. And so I stayed." Even so, Pierre, who is holder of the prestigious French National Order of Merit and is married to a beautiful Jamaican woman, tries to make regular trips back home. "I try to go to France every year because my dad is very old," he explains. "I stay about ten days there because I'm very busy here. So ten days holiday is the most I can do." He lets out a chuckle.

Passionate as he is about France and his family, the acclaimed stage director and Edna Manley School of Drama lecturer long discovered that the great love of his life is the theatre, particularly the relam of musicals and children's productions (One Smart Pig, The Button-Hole Bandit), to which he brings a delightful sense of wonder and whimsy without losing his keen and unerring eye for miniatue. And when it comes to musicals on the Jamaican stage, there are none more wildly popular and diverting than the work of the LTM Pantomime Company, which Lemaire steps up to direct this season.

"It is very different and interesting, because it's a complete fusion," he says of working on The Golden Macca Fat. "And the way Miss Gloudon works, she writes and includes what everybody does in the writing. So it's really a creative collaboration, and I find that a very interesting experience." 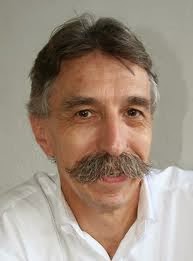 With his dense moustache, unmistakable European accent and easy-going mannerisms, Pierre is quite an interesting character himself, prone to having multiple irons in the fire at once. Apart from his Edna Manley College duties, he teaches at UWI's Carimac school, runs a company called Global Media Services (with actor Alwyn Scott), freelances as a commercial theatre director and is actively involved with the Jamaica Alternative Theatre, which works with the visually and hearing impaired.

He buzzes with a garrulous energy, whether he's talking about his boys (big son Adrian run Mailpac; the other, Stefan, is finishing up at UWI) or finding joy in whatever that is commanding his undivided attention. "I'm still discovering. Every time I work on a particular project I discover more about my art form and more about myself," confesses the 62-year-old, whose next play is the children's story, Wild Alice. "My students keep me busy, and I have fun doing my work. That's my thing; as long as I have fun doing it, I do it. The day I don't have fun doing it, I stop."