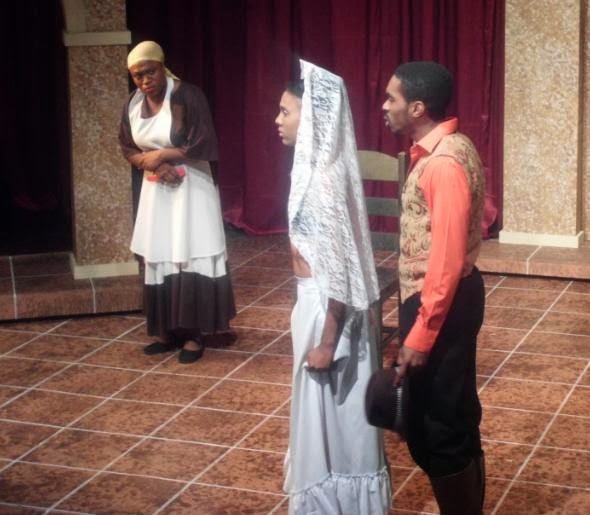 CHARACTER STUDY: Actors enact a scene from the School of Drama's Blood Wedding.

2013 was undoubtedly the Year of the Actor, featuring an astonishing range of memorable turns by performers seemingly bent on redefining the idea of the Jamaican thespian. And that only made my job as critic all the more thrilling and, I'll admit it, fun -- but extremely difficult when it came to narrowing down the overall bounty of shows to a Top Ten. Still, I took immense pleasure in hand-picking the absolute cream of the crop and present them here (in no particular order) as my year-in-review tribute to Jamaican stage magic:

1. JAMAICA SWEET: Performed by a riotous ensemble cast (Terri Salmon, Michael 'Stringbeans' Nicholson) and featuring terrific writing from David Tulloch, the show came off as a smashing song-and-dance revue that entertainingly captures the heart and soul of Jamrock.

2. THICKER THAN WATER: Ace writer-director-producer-actress Dahlia Harris compellingly led a stellar all-female army in this oestrogen-spiked examination of gender, a whole new way of "relating" to family, and the workplace as battlefield.

6. CLUE: Heralding the arrival of a refreshing new voice in Jamaican playwrighting (actress-turned-writer/producer Laveda Thompson)) -- and an outside-the-regular addition to the annual bounty -- this spooky whodunit delivered intricate plotting as well as passionate acting from stars Makeda Solomon and Jerry Benzwick.

7. LADIES OF THE NIGHT: A clever and sharply funny comedy-drama exploring the world's oldest profession from a Jamaican perspective while showing us the fears and the heartache and the dangers that these hustlers face in the name of survival.

10. BLOOD WEDDING: One can always count on the Edna Manley College's School of Drama to annually mount productions laced with universal resonance. Their memorable, emotionally rich take on the Lorca classic scored dramatic gold and yielded, too, a fierce breakout turn from Neeka Whyte as it's stern, disapproving matriarch.