THE MARRIAGE PLOT: If There's A Will is a thrilling union of broad humour and memorable performances 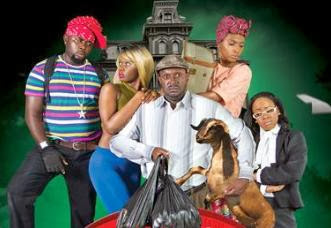 You'll find that in modern society people have remarkable flexibility when it comes to the ubiquitous subject of marriage. And that is precisely the argument that bubbles to the surface in If There's A Will, There's A Wife, Patrick Brown's new wide-eyed look at ambition and voracious greed in a play that offers yet another astonishing display of Brown's skill as a comedy writer for Jamaican audiences and a solid vehicle for Glen Campbell's wide-ranging talents as a star of the stage.

Campbell is Abraham 'Abe' Adams, a yam farmer from deep rural Westmoreland (the fictitious Rat Trap to be more precise) who is not exactly the brightest bulb in the tanning bed. A telegram brings him to Kingston to meet with posh attorney-at-law Tish Jones (Sharee McDonald-Russell) at her modest office where he learns that a late uncle (dead from a heart attack) had bequeathed his entire multi-million-dollar estate to him. But there's a catch: he cannot properly inherit until he ties the knot.

Before long, nouveau riche Abe, who begins accepting 'applications', finds himself caught in a tussle among the women suitors vying for his attention (read: his millions), including Camille Davis' gold-digger par excellence Kim, a downtown girl with seriously uptown tastes and Tish herself, who seems to have dollar signs permanently etched to her eyelids. Then there's the lowly yet sharp-tongued Etta (Sakina Deer), the childhood friend and confidante that Abe brings (along with cherished goat Daisy) from Rat Trap to work as his Beverly Hills housekeeper. Though he's not among those asking Abe to put a ring on it, Courtney Wilson rounds out the cast as rudeboy/yardboy Ivan.

Proving yet again how well he knows his way around a wisecrack, Brown fashions a richly amusing, occasionally melodramatic tale buoyed by a sequence of events that are utterly life-altering for the players involved.

Jambiz's regular rotation of actors step into parts that they make their own with compelling believability. While Davis spares no punches as the out-to-get-hers Kim, Deer brings a rib-tickling country-marm vibe to the no-nonsense Etta. McDonald-Russell and Wilson, though given to sporadic bouts of overacting, nail the fierce and deep desires of their characters.

Campbell is a pro at portraying Jamaican men full of potential for greatnes but stymied by discursive thought process (he played a music manager/gigolo in Ladies of the Night), and Abe presents his latest golden opportunity to transform. He doesn't disappoint.

As for the bigger picture, If There's A Will (with its stylish set design and decent lighting) offers the sobering reminder that matrimony isn't always regarded with the lofty respect that it merits. Even more to the point, upon discovering that your ideal match has been by your side all along, one realizes that it's time to call off the search. Tyrone's Verdict: B+