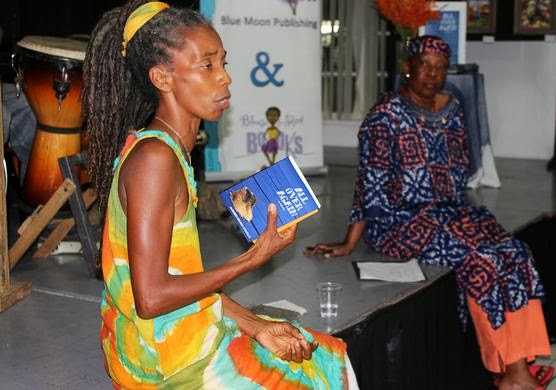 WOMAN OF HER WORD: Simba (left), with Amina Blackwood-Meeks at the UTech launch of her debut novel in Oct. 2013.

"Over 50 and loving it,"A-dziko Simba Gegele quips laughingly when the subject of her age comes up during our conversation at Sunday's breezy Arts in the Park at Devon House, where the poetess and published author was among the featured acts. In person, Simba (a product of both the British and Jamaican traditions) comes across as very grown-up indeed and effusively warm and speaks with the refined measured tone of someone raised on lambs and literature.

She brings that same sort of intellect to her work, be it the spoken form (she's a fierce dub-poetry performer, who released a CD dubbed Crazy Lady Days) or the written word (her efforts include the well-received debut novel All Over Again). And there's more where that came from, she tells TALLAWAH. "I'm working on a couple of other books, and the follow-up CD is long overdue," she says, "but they probably won't be released until next year of the year after that."

TALLAWAH: How do you define yourself as an artist?
Simba: I see myself primarily as a writer and a performer, but I like to bleed into other areas. Theatre is one of them. Storytelling as well.

You have quite a "laffly" accent. Tell me a bit about your roots.
I was born in England to a Jamaican mother, my father is Nigerian. And I've been living here for almost 16 years now.

What do you do when you're not writing?
Thinking about writing (Laughs).