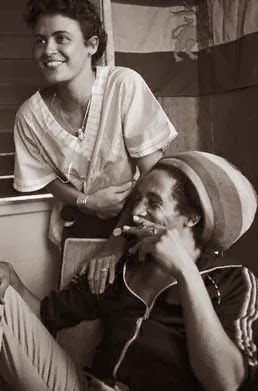 COLOUR MY WORLD: The dynamic duo sharing happy times, circa 1977.

Muse, confidante, lover. Cindy Breakspeare played big roles in the Bob Marley story. But how does she feel now, decades later, when she reflects on the time she spent with the man who would be king? Herewith, a few key highlights from her recent lecture at the UWI:

The "friendship" with Rita and the Marley women:
"Rita and I were no strangers to each other and would go on to spend Christmas together at Bob's mother's home in Florida..... [When Damian was born], Rita and Sister Minnie came to visit along with the rest of the family, maybe to satisfy themselves that he was indeed Bob's child. Who knows? It was fine. Damian's resemblance to his father was obvious from the day he was born."

The joy of watching Damian and the second-generation sons become men:
"It's been over 30 years since Bob said goodbye in the flesh, but his light burns brighter than ever through his music and through his children. It is my greatest joy to watch Damian take the stage while Donovan keeps the flag flying tirelessly overhead. Shia Coore (Cat's son) is there, David Cole ('Skill' Cole's son) is there, Nesta Garrick (Neville's son) is also there, just to name a few of his amazing friends and support system. I beyond any shadow of doubt that I will never have to hang my head in shame when Damian steps up to the microphone. He is his father's son. Not perfect but perfectly conscious of the responsibility handed down to him and to all his siblings.

On Bob the peacemaker:
On April 22nd, 1978, I sat in a packed stadium, along with his mother, Cedella, and other family members, six months pregnant, and watched in awe as Michael Manely and Edward Seaga joined hands with Bob in the middle, trying to again effect a peace between the JLP and the PNP, the same initiative that was thwarted by political violence.....Bob was indeed a man on a mission who loved his country fiercely. He desperately wanted to see the divisiveness caused by political rivalry to come to and end, as it clearly benefitted no one."

So hard to say goodbye:
"The night we cut his locks was heartbreaking. The lights were dim and we burned incense and read from the Bible. He marveled at how light his head felt when they were gone. He was concerned about his children's reaction to seeing him without them. He joked with them and tried to make it seem like no big thing. And, as usual, the people came."

Today, decades on:
"In my travels, the love and respect and, at times, reverence that total strangers extend, simply because I knew him, is overwhelming. And I know it has little to do with me and everything to do with him.....Bob will outlive us all. I'm sure of that, and I will be extremely grateful to Jah, Providence, Fate, God Almighty, or whatever Higher Power one looks to, grateful for stretching that bridge out before me, and keeping me on it year after year, as I truly believed that Bob, a natural mystic, showed us that One Love is the answer.