FACING FORWARD: After a painful career crisis, Veronica Campbell-Brown is back in stride 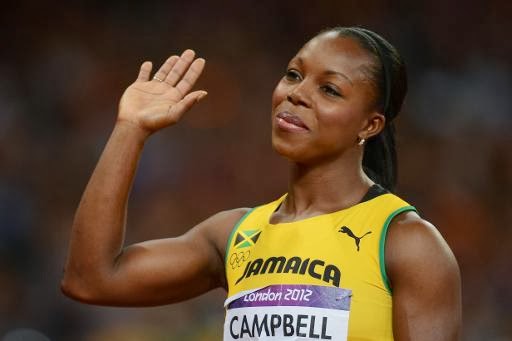 HAND IT TO HER: The sprint queenpin photographed at the 2012 Summer Olympics in London.

Fans of Veronica Campbell-Brown were left baffled when news surfaced last year that the sprint icon had returned a positive result for a banned substance (a diuretic) at the Jamaica International Invitational (JII) held in May at the National Stadium. The veteran sprinter vehemently denied the doping allegations and for eight months fought tooth-and-nail to clear her good name.

Her courageous efforts have borne fruit as the Court of Arbitration for Sport (CAS) has upheld the appeal she filed and set aside the decisions of the Doping Review Board of the International Association of Athletics Federation (IAAF), which slapped her with a two-year ban in response to the positive test.

For Campbell-Brown, widely considered the Merlene Ottey of her generation, a huge weight has been lifted off her shoulders, with the culmination of a terrible ordeal that threatened to tarnish her image and thrust her legendary track career into disrepute. A statement from her camp lucidly put things into perspective. "The past several months of my life have brought much pain and suffering," the 31-year-old admits. "However, my faith, family and fans have stood by me as a source of encouragement and reminder that God's word is true in that he will never leave us nor forsake us."

The stage is now set for the ace athlete to reposition her focus on her twin passions: competing for Jamaica and doing good in the neighbourhood via her eponymous nonprofit foundation. "My legal team and management team will be available to address the media in greater detail, as I now focus on moving forward with my career and philanthropic efforts," she emphasizes. Campbell-Brown won't have to wait for very long to don the black, green and gold once again, as she is among 23 athletes (and six officials) who've been selected to represent the island at the IAAF World Indoor Championships, set for March 7-9 in Sopot, Poland.

She joins the likes of Shelly-Ann Fraser-Pryce, Kaliese Spencer, Anneisha McLaughlin, Allodin Fothergill and Nesta Carter on the Team Jamaica squad. "I've been training. I was born to run track-and-field. I love track-and-field," Campbell-Brown, a 16-time Olympic and World Championship medallist, told a radio audience earlier this week. "I've been training hard, and I thank God that he has kept me healthy through this terrible period in my life."