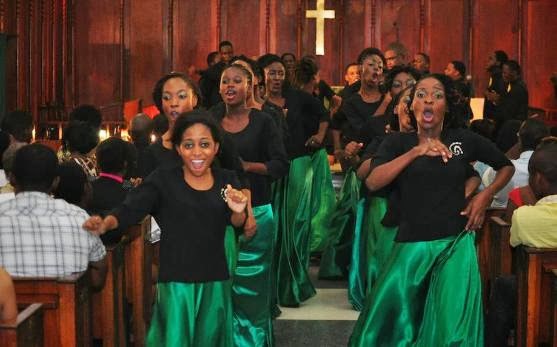 SHOW STOPPERS: The choir brought a joyful noise to the UWI Chapel on the weekend.

By the time the Jamaica Youth Chorale gave a pitch-perfect rendition of "Didn't My Lord Deliver Daniel" (with breathtaking solo work by soprano Sandrie McKnight), the packed audience was well in their thrall inside the University Chapel on Sunday evening, as they presented their fifth annual major recital dubbed Ancestor Voices: Lift Every Voice for Freedom, in observance of Black History Month.

Drawing on a fantastic melange of Negro spirituals and sacreds (some well-known, a few quite obscure) and some local fare, the choir served up a hugely enjoyable performance heavily marked by lush choral harmonies in the tradition of the University Singers, complete with tasteful choreography and intermittent accompaniment with just the right touch of keys and drums.

Robust acapella renditions (refreshingly arranged) elevated such pieces as the concert opener "Lift Every Voice for Freedom", "Ezekiel Saw the Wheel", the slow-burning "I've Been Buked" and "Wade in the Water." The second half only brought more highlights and rousing solos. Particularly memorable were the sublime, Adaiah Rhoomes-led "I Had a Vision" and "Ise Oluwa" (both wonderfully arranged by Dr. Kathy Brown), which merited the prolonged applause they both received.

The all-female piece "Man from Galilee" got quite the theatrical treatment with props and fancy headgear, while the tenors and baritones made humorous, light work of "Wrong Train," thanks in large part to show choreographer Ricardo McKenzie's charismatic lead. Also thrown into the mix: Dr. Olive Lewin's "Holy Mount Zion," which conductor Greg Simms revived as Nyabinghi Meditation No1 and dressed up with tunes by Tarrus Riley and others, and a sprightly "Freedom Suite" blending vintage and modern melodies. The list goes on.

In the end, it seemed like the concert wrapped all too quickly. (The performance ran for close to two hours.) Still, the Jamaica Youth Chorale, impeccably attired in the black, gold and green, sent home their patrons with a real sense of fulfillment and more than a few soulful gems stuck in their heads.