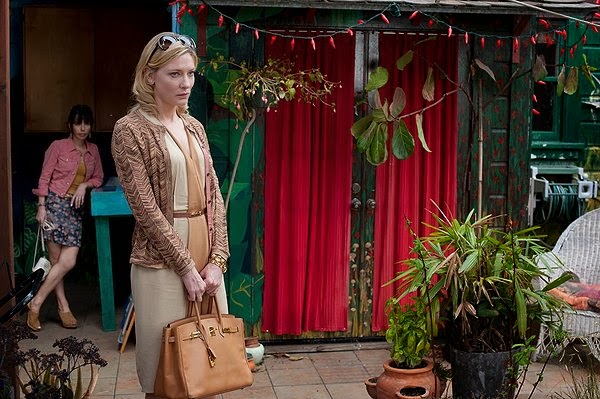 IT'S IN THE BAG: Blanchett is brilliant as a Blanche DuBois type in Allen's latest.

Diane Keaton (Annie Hall), Dianne Wiest (Hannah and her Sisters), Penelope Cruz (Vicky Cristina Barcelona), Scarlett Johannson (Match Point). Perhaps Woody Allen's greatest gift is writing splendid screen roles for actresses that tend to attract awards recognition. In Blue Jasmine, Cate Blanchett gives a performance so memorable and full or ripeness that it's bound to become one of the great ones of her career.

Jasmine French, Blanchett's meaty character, is a woman fast losing her grip on sanity in the wake of her husband's downfall, a cataclysmic shift that sends her into a tailspin and onto the very brink of poverty.

Hal (Alec Baldwin), her husband, was a sleazy crook, of the Bernie Madoff variety, who swindled unsuspecting investors of millions and slept around. When the feds got wind of his scheme, Hal is arrested and Jasmine is forced to move in with her sister Ginger (Sally Hawkins) in her modest San Francisco apartment. But make no mistake, Jasmine holds firmly to her delusions of grandeur, even as she drinks like a fish and is forced to seek the kind of employment that represents a huge comedown from the posh lifestyle she previously enjoyed.

With unmistakable echoes of Tennessee Williams' A Streetcar Named Desire, Blue Jasmine is a trenchant, endlessly funny character study centred on a fading Southern belle and the fractious relationships that surround her, pushing her over the edge. Blanchett superbly anchors Allen's brilliant script but many of the film's most rib-tickling moments are thanks to Hawkins' pitch-perfect comic timing, particularly in scenes where she clashes with her brutish boyfriend, played by Broadway's Bobby Canavale.

In short, the Best Actress trophy is Blanchett's to lose come March 2, given the impressive and continued awards-season sweep, due in large part to a role that could never be more suited to her enormous range and admirable depth as an actress of the stage and the screen. Tyrone's Verdict: A