PLAY IT AGAIN: Edgy band on the rise From the Deep blends pedigree and passion 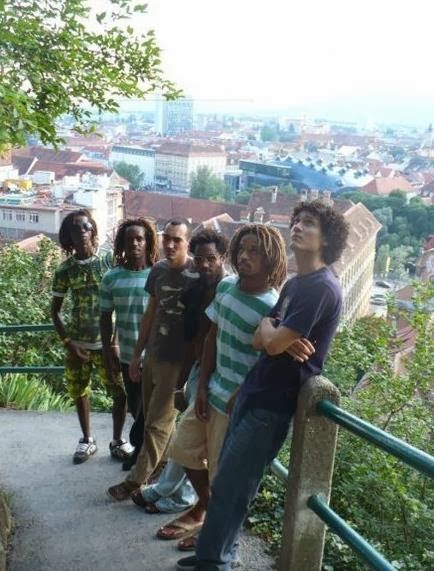 THE VIEW FROM HERE: The bandmates posing for a group portrait in Kingston.

It is a tendency of young artistes, bands even, to go their own way at some stage of their creative lives. But for a fortunate few who hail from iconic bloodlines, there's always that storied legacy to constantly pull from.

In the case of the emerging live-music aggregation From the Deep, being descendants of the legendary Mystic Revealers (fronted by Billy Mystic) is a heritage for which they're grateful but don't exactly feel pressured to live up to. "It's no pressure, but it's something that we take seriously," explains group frontman Inilek Wilmot. "We started out listening to their music in the rehearsal room, and then we began rehearsing in the same room that they used to rehearse in. It feels very natural to us and we're proud to be part of that legacy."

The quintet, made up of Billy's sons (Inilek, Icah and Ishack) and a couple of their closest friends (Loren Couch and Jeremy Ashbourne), began their journey together about a decade ago, and though they haven't been as visible on the live-music scene as some of their peers, they've been banking serious studio time ("Right now we're recording a few new tracks.") and popping up every now and again to play events like last Sunday's Arts in the Park at Devon House ("We want to do more events like this.")

If there's one thing that's unwavering about From the Deep (in addition to championing roots-reggae vibrations) it's their loyalty to the popular Bull Bay hot spot Jamnesia and the wider Eight Mile community. For those who don't know, Jamnesia is largely credited with helping to jump-start the stage-performance careers of such hitmakers as Chronixx, Kabaka Pyramid and Protoje. "We're coming from that same camp. So that's where you can always find us," shares Wilmot.

What makes Jamnesia such a landmark "institution" for emerging reggae acts from that area? I wanted to know. The all-important launching-pad factor, Wilmot is quick to point out. "It's a place that gives bands and young acts an opportunity to really play live music. There are not many small-stage venues around, and not many places where up-and-coming artistes can grow," explains the 20-something guitarist and lead vocalist. "So Jamnesia provided, and continues to provide, a unique stepping stone to the big stage events at a time when there were none."

Email ThisBlogThis!Share to TwitterShare to FacebookShare to Pinterest
Labels: Bands, From the Deep, I'm With The Band, Ones To Watch, Reggae, TALLAWAH Exclusive, Youth Spotlight