SOLDIERING ON: For Jamaica's women recording artistes the journey continues 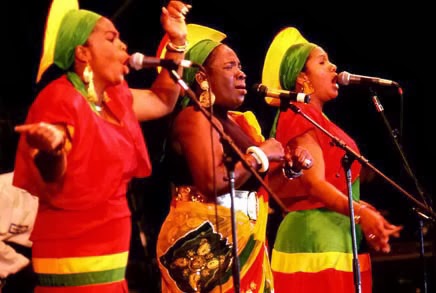 ICONIC VOICES: Mowatt, Marley and Griffiths among the legends singled out for special mention.

Though women entertainers have made gigantic strides in Jamaican music, contributing significantly to the advancement of the industry, they still have much, much farther to go. Such was the overwhelming consensus following a spirited panel discussion dubbed "Pioneering Women in the Music Industry," which formed part of the Jamaica Reggae Industry Association's (JARIA) brilliantly conceived Open University sessions in observance of Reggae Month 2014. "It's a cross we have to bear," lamented panelist Lorna Wainwright who, in her heyday, toured extensively with the Melody Makers.

To Wainwright's mind, female artistes, particularly today's neophytes, lack adequate guidance. "I was lucky to have teachers, and I think that's what we need now," she told the modest gathering inside the Louise Bennett Garden Theatre on Thursday evening. "We have to teach the youngsters, pass on the knowledge. You do have girls and women in the industry today who are qualified and are just sitting and waiting."

On that note, audience member Yvonne McCalla-Sobers expressed concern about the plight of the all-female bands. "Are they getting work?" she wanted to know. "I know that a few of them exist, but when you go to some of these live shows you don't seem them on the lineup. We have to address that."

Meantime, the matter of artist management and the ever-changing roles of our record companies and the School of Music also wound up in the discussion, which eventually drew an appearance from the JLP's Olivia 'Babsy' Grange and other well-known pioneers like Mary Isaacs.

Said Wainwright, "I feel record companies need to be at the top of their game. The support that artistes get from them is absolutely crucial. The reason why some of these women became pioneers has to do with the management and grooming they got. You might have a hit here and when you go overseas you flop. It's how you are groomed that takes you forward, women and men. Dancing ah yard is different from dancing abroad."

In between raising these and other pertinent issues, the panel (also featuring the likes of Pat Chin and Yvonne Chang) made time to salute several of the legendary ladies who helped shape the course of reggae history, namely Marcia Griffiths (who was expected to grace the panel but was unavoidably absent), Phyllis Dillon, Adina Edwards, and Rita Marley and Judy Mowatt, described as "soldiers in the army with the general Bob Marley, who taught them how to balance the music and family."

Jamaica has no dearth of naturally gifted female vocalists, musicians, and the like, though the male-dominated industry tends to suggest otherwise. "Many more are out there," said radio host Isis, who organizes the annual Womanbition concert that brings together a host of all-female talents from all facets of the performing arts every March. "It is up to us to discover them and to support them and put on events to support them."