VOCAL DYNAMICS: With a bright future ahead, the JYC puts shoulder to the wheel 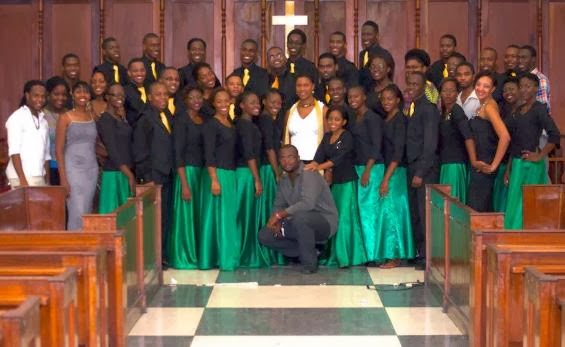 ALL TOGETHER SING: The choristers, with band members, inside the UWI Chapel at Mona.

Although the Jamaica Youth Chorale doesn't put on concert recitals with great regularity, the choir, which turns five this year, remains determined to make its mark, put that initial dent in the cultural psyche, so to speak. "It's growing, slowly but surely," the group's principal director and founder Greg Simms tells TALLAWAH, following a bravura performance which all but lifted the roof off of the University Chapel on Sunday.

To my mind, the 30-member choir is simply sensational (and deserve greater visibility), buoyed by a powerful blend of young voices which harmoniously brings melodies to rousing, full-bodied life. "We have a large rural following already, and right now we have invitations to places like Portland, and we're going to Montego Bay in April," Simms explains, adding that they've also thrilled audiences at a few national events, serving as the official choir for the Jamaica 50 church service, for instance, and have lent their choral dynamics to such regional productions as Caribbean Passport.

Up next is the real acid test, when they compete for top honours against the best in the world at this summer's Llangollen International Musical Eisteddfod (July 8 through 13) in Wales. Naturally, the excitement/anticipation quotient is at an all-time high in the JYC camp. "We're all very excited," Simms says, "and we are yet to present the true competition repertoire, which is a lot more complex. But we're getting to work now to really drill and get that going."

As one can imagine, getting the choir to Wales will be no cake-walk, financial-wise in particular. But where there's a will, there's a way. "We have received a grant from the organizers, which is very good for us. They want us to come," the director reveals. "We're trying now to collaborate with funders and see how best we can leverage any sort of network we have to get the ball rolling."