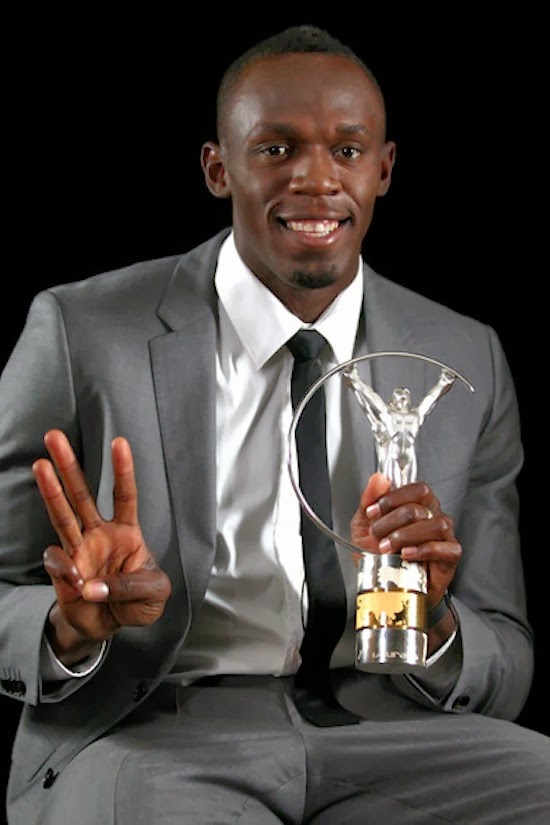 REASON TO SMILE: The Jamaican sprint king posing with his 2013 award.

Global accolades are old hat for Usain Bolt, the reigning IAAF Male Athlete of the Year and the RJR Sports Foundation's 2013 Sportsman of the Year, who is constantly making room in his trophy case for new additions to complement his Olympic and World Championships stash.

The Jamaican track phenom and World's Fastest Man (already a three-time winner) is presently in the running for his fourth lien on the prestigious Laureus World Sportsman of the Year award, nominated alongside some worthy contenders.

The list includes the likes of LeBron James, Mo Farah, Rafael Nadal, Cristiano Ronaldo and Germany's Sebastian Vettel. Bolt, who put in some serious work on the track last season (and has the gold to prove it!) is the frontrunner for the highly coveted award, but it remains to be seen how the voting will go.

Meantime, another Jamaican could bring home something shiny from the March 26 ceremony (taking place in Kuala Lumpur, Malaysia), as Shelly-Ann Fraser-Pryce, who has been impressively keeping pace with Bolt on the awards circuit all season long, is vying for Sportswoman of the Year. The speed queen, a favourite for the prize, is up against Nadine Angerer, Missy Franklin, Yelena Isinbayeva, and Grand Slam champ Serena Williams.

There are quite a few other categories in the mix this year, bringing the total number of nominated athletes to 42. Established in 1999, the Laureus is awarded annually in recognition of international athletes who gave jaw-dropping performances in their respective sports in the previous year.