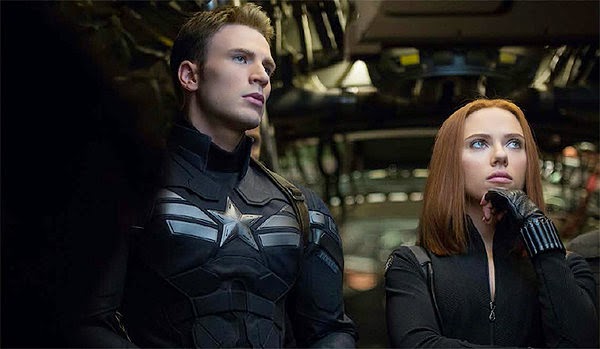 PRIMED FOR ACTION: Evans (as Captain America) and Johansson (as Black Widow).

Here's one way to craft a supercool and memorably entertaining action blockbuster: combine high-octane thrills and deftly choreographed fight and chase sequences with solid acting and emotional heft. The result could out to be a loud and messy affair but in the case of Marvel/Walt Disney's Captain America sequel, The Winter's Soldier (which has attained the largest April opening at the box office in movie history), it's a turbo-charged superhero epic and edge-of-your-seat thrill ride.

As far as the plot goes, the whole idea of nefarious power brokers intent on world domination is nothing new but the far-fetched circumstances here (combined with the titular hero's derring-do) are largely what help make this popcorn smash so endless fascinating and worth the trip to the cinema.

When disaster strikes, the battle is not Captain America's (the charismatic Chris Evans) alone, as he is well-backed by a strong support unit comprised of the high-powered Nick Fury (Samuel L. Jackson), tough cookie Black Widow aka Natasha (Scarlett Johansson) and the newest recruit, a buff Anthony Mackie as Sam Wilson/The Falcon.

Long-time cinephiles will get a kick out of seeing Robert Redford stepping outside his comfort zone of serious drama to tackle the role of Alexander Pierce, a corporate bigwig who may be up to no good. Another noteworthy cameo: Emily Van Camp of TV's Revenge as a slick undercover agent.

All sorts of mayhem breaks loose, underhanded schemes are brought to light and as the film climaxes, director Joe Russo ratchets up the boom factor. So while Captain America doesn't exactly add anything new to the superhero canon, it yields an exciting story full of intrigue while centred on themes of patriotism, diplomacy and honour. Tyrone's Verdict: B

Email ThisBlogThis!Share to TwitterShare to FacebookShare to Pinterest
Labels: At The Movies, Films, Flick of the Week, Movie Reviews, Superhero epics