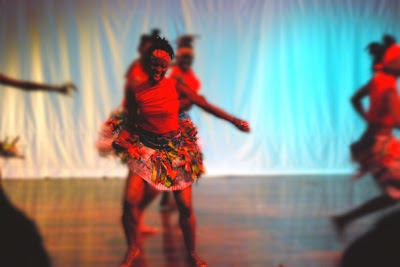 IN STEP: EMC students and faculty collaborate for the annual showcase.

Danceworks is traditionally a celebratory showcase put on by the School of Dance spotlighting the latest and very best in conceptual choreography by students and faculty. By and large, a tapestry of what they've been working on all year. But this season while they stayed true to that original premise with delicious results, it's the contributions of two choreographers that I'd like to bring to your attention.

First, the NDTC's Chris Walker (presently on staff at the University of Wisconsin), whose 2011 opus "Cool I and Isaacs" came in fir a sublime remount thanks to the collaborative efforts of Sophia McKain, Paul Newman, and Kayon Wray. A feat of technique and swagger, the piece pays eloquent homage to the cool and identifiably Jamaican sounds of Gregory Isaacs and is a stirring ode to his memory, even as it delves into popular expressions in the wider Jamaican context. And while "Cool I and Isaacs" is chock-full of solo moments (Kimiko Miller opens the piece, Neila Ebanks slips into a militant mode), Walker reveals a gift for choreographing group that lends the dance a collective richness all its own.

Secondly, Newman deserves high commendation for producing two of the most riveting pieces of the season: the sharp and pacy "In-Transit" and the robustly thrilling "MCon (Military Conformity)" which draws on the talents of an energetic all-female troupe and a hard-hitting dancehall soundtrack (Damian Marley, Mavado et al) to explore attitudes towards, not to mention, the pros and cons surrounding the whole idea of conformity. (I, for one, am very much in support of "expect the unexpected".) As a performer with the NDTC, Paul has consistently brought intelligence and flair to his movements on-stage; as an emerging choreographer, on the other hand, the imagination and intellect his work conveys is nothing if not impressive.

Elsewhere, Danceworks 2014 (the 18th instalment) delivered its signature mash-up of kinetic energy, fascinating ideas and fit, fleet-footed bodies to bring the pieces to life, all these elements shaken and stirred to produce an electric cocktail in motion. While Michael Holgate ("Reach Back Forward") was content to continue his fixation on movement spurred by African beats and rhythms, final-year BFA student Camargo smith ("Chasing Time") chose to tackle the everyday rush and corporate gleam of the corporate world where it's all about getting ahead and he tick-tock of the clock.

But the best of the rest was undoubtedly Oneil Pryce's newest effort, Opacity, an atmospheric and deeply affecting take on existence and identity. It's a rather lengthy but intensely watchable piece with a certain delicacy to it, from the filmy Barry Moncrieffe costumes to the cinematic musical accompaniment. If nothing else, this year's Danceworks managed to refresh the persuasive argument that when it comes to dance theatre, there's always a certain bliss, and potential for discovery, in making the journey from process to performance.