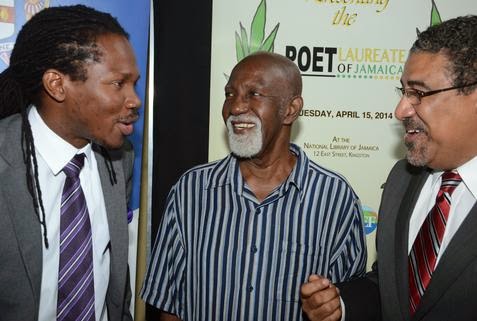 MAN OF THE HOUR: Morris (centre), with the Tourism and Entertainment ministry's Damion Crawford (left) and Wykeham McNeil at the National Library of Jamaica.

Jamaica has not appointed a national poet laureate in well over half-a-century to put on the sturdy size-10 shoes previously filled by Tom Redcam (after whom the Kingston & St. Andrew parish library is fittingly nicknamed) and J.E. McFarlane. But who better to deservingly occupy such an important post now than Professor Mervyn Morris, the literary luminary, academic and legendary critic who has close to 50 years under his belt as educator, author and inspiration?

Last Tuesday, a 10-member committee assembled by the National Library of Jamaica and the Entertainment/Tourism ministry's Entertainment Advisory Board made the official announcement that Morris had accepted "the job" and is set to serve a tenure lasting for the next three years.

As Poet Laureate of Jamaica, Morris' responsibilities are sure to play to the cultural icon's strengths as both thinker and wordsmith of the highest order, as they include the promotion of reading and Jamaican literature, as well as the undertaking of poetry events for general public consumption. What's more, the role will see the Munro College and Oxford University old boy championing lyrical verse as a medium for entertainment and for "disseminating cultural heritage while celebrating and propelling Jamaican poetry to new heights."

Very much like such peers as Prof. Eddie Baugh and Dr. Erna Brodber, Professor Morris' illustrious career, public life and body of work have stood the test of time and hold him in good stead for the task ahead. Most popular among his acclaimed writings are Is English We Speaking (1999) and 2005's Making West Indian Literature. I Been There, Sort Of (2006), meanwhile, ranks highly among his six notable collections of poems.

As expected, the 77-year-old Morris views his appointment as yet another opportunity to contribute significantly (and help draw much-needed attention to) the country's dynamic literary culture. "It's an honour and I'm grateful," Morris, who became a member of the Order of Merit (OM) in 2009, has said in response. "My remit is to help promote Jamaican poetry at home and abroad." Come early next month, Governor General Sir Patrick Allen will officially present Mervyn Morris with his Badge of Office during a King's House ceremony.