IN OUR TIME: Caribbean Quarterly remains a probing reflection of island living and learning 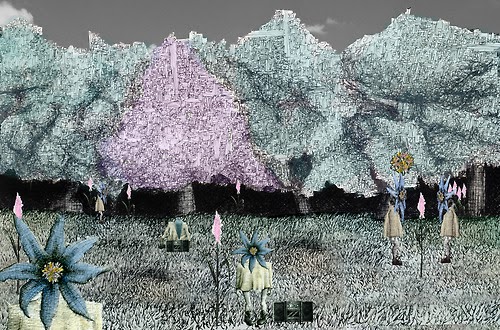 PICTURE THIS: Versia Harris' animation stills, like the one pictured here, comprise the Artist's Voice feature.

For over 40 years Rex Nettleford, in the tradition of Sir Philip Sherlock, served as editor of Caribbean Quarterly, the flagship journal of the University of the West Indies, and under his expert hand the publication bloomed into a shining beacon of hope for the region as a place of rigorous intellectual pursuit and profound reasoning by notable scholars and thinkers and writers who rank among the best on the planet.

More than 50 volumes later, new editor Kim Robinson-Walcott has a firm grip on the baton, and as such the quarterly (one of the oldest periodicals in the English-speaking Caribbean, continues to flourish. The latest edition, for instance (considering themes of memory, reconciliation and freedom) bears striking testament to the lofty standard and A+ quality that it continues to uphold.

Content-wise, the feature articles are fine studies of intellect, relentless investigation and robust imagination, with such standout pieces as Zetta Elliott’s expansive “All Land is One Land under the Sea: Mapping Memory in Canada and the Caribbean” while Curdella Forbes delivers the witty and addictively readable “Caribbean Women Writing: Social Media, Spirituality and the Arts of Solitude in Edwidge Danticat’s Haiti.” I’d encourage everybody to read Forbes’ brilliant article.

Elsewhere, Anton Allahar pays tribute to a true Caribbean original with “Gordon Lewis: An Appreciation” and the Centre for Caribbean Thought thoughtfully salutes the life and legacy of Stuart Hall. The book reviews also make for informative reading. Among the close to 10 reviews, Earl McKenzie dissects Suelin M. Low Chew Tung’s Grenadian story collection A Patch of Bare Earth, Rupert Lewis offers a piercing take on Jan Carew’s Potaro Dreams: My Youth in Guyana, while Erna Brodber’s The World is a High Hill: Stories about Jamaican Women is refreshingly scrutinized by Dalea Bean.

The issue opens with an intriguing series of animation stills by award-winning Bajan artist Versia Harris (“At the centre of my investigations stands the theme of self-image.”) and closes with four fabulous pieces from Shallow Water: A Short History of Where I’m From by Ernestia Fraser, a native of the Bahama, who renders such magical lines as “to be complete in the incompleteness of who we are, small specks of light on God’s grand horizon of solitude.” (Letter to a Caribbean Man).

Posted by TALLAWAH Magazine (tallawahmagazine@gmail.com) at 11:59 am