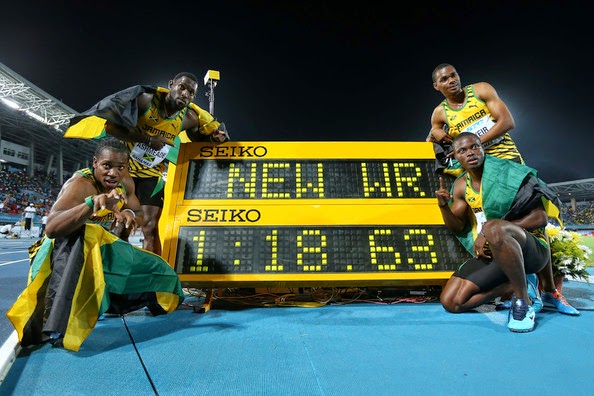 IT'S A SIGN: The fantastic four of Blake, Ashmeade, Brown and Weir strike a pose.

Tasked with building on the firm foundation laid by the forerunners, the newly minted Team Jamaica has responded with relish, proving they’ve got a sturdy grip on the baton. And quite literally too.

This past Saturday, May 24, the exemplary quartet of Warren Weir, Jermaine Brown, Nickel Ashmeade and anchor leg stalwart Yohan Blake made this abundantly clear when they powered a quality international field to take gold in the Men’s 4 X 200M final at the IAAF World Relays inside Nassau’s Thomas Robinson Stadium in the Bahamas.

Simply put, it was a tour-de-force performance, which snagged the ultimate bonus in the guise of a spanking new world record time of 1:18: 63 minutes, erasing the previous mark of 1:18:68 set by the US-based Santa Monica Club in 1994.

In the end, the Jamaican athletes deservedly basked in the glow of their golden triumph, yet waxed humble about doing their country and themselves proud. “We knew that we could come out here and get this medal and record, and it feels very good, even though I think I could have gone faster,” Blake told reporters, while Weir noted, “The guys were great. I really wanted to be involved in a word record run, and I’m happy that I was able to contribute.”

As for the tangible reward, the Jamaican team was awarded US$50,000 and will pocket US$50,000 more when the record is ratified.