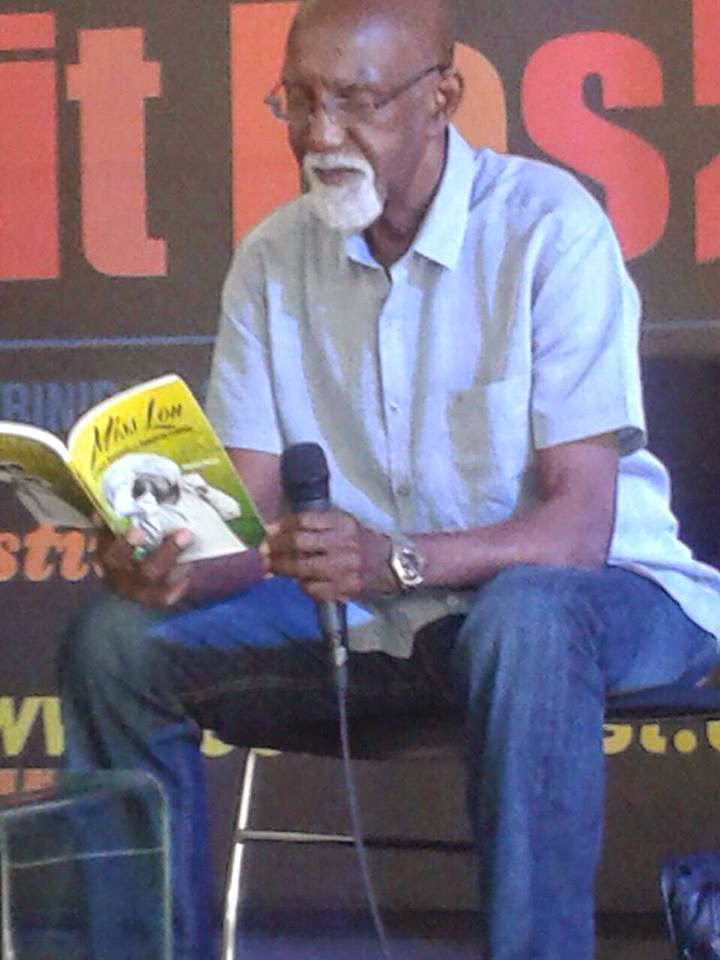 COVER TO COVER: The author delivering passages from his must-read new book.

One of the real pleasures of devouring the nostalgia-spiked Miss Lou: Louise Bennett and Jamaican Culture by Mervyn Morris is the refreshing mix of Jamaican history and folklore that it captures. But what makes the book a clear winner? The insightful revelations about the cultural icon as the fierce talent she was and the phenomenal woman she became.

A Place to Call Home:
When they were seeking somewhere to set down roots and make their home, the Coverleys (Eric and Louise) settled on a neglected stone building on a hill beside the river in Gordon Town. With loving care and meticulously selected furniture, they transformed it into a haven they then called Enfield House. Recalling her visit to the home in her book Independence Swing, Jean Wilson noted that the drawing room in particular, replete with mementoes, was “comfortable and warm with life, good humour and love.” “One knew instinctively that everything in that room was there because it was wanted and appreciated on its own merit or because it represented some fond memory or achievement – not because it would look good here or filled a space there. People really lived in that room.” The Coverleys’ New Year’s Eve parties were legendary, the book also points out, with a mento band from the village and an actual fire in the fireplace.

All in the Family:
Mr. Coverley became deeply involved in Gordon Town life, even serving as Chairman of Gordon Town All-Age and became a father figure to the youngsters. Miss Lou had had a hysterectomy, but she and her husband became parents many times over. For nearly three decades their household absorbed a steady stream of other people’s children whom they brought up with Fabian (Eric’s son before his marriage to Miss Lou), some staying a few months or a few years, and some longer. Some were related to people employed by the couple.

Show and Prove:
When the LTM invited her to write a pantomime for them, Miss Lou immediately took up the challenge. Working with Noel Vaz (who was also the director) she co-authored the 1949 script Bluebeard and Brer Anancy. The production was the first in a series of pantos starring Miss Lou and Ranny ‘Mas Ran’ Williams and the first with a title that includes Anancy, a role which Williams made his own. The show is also memorable for the enduring popularity of the opening song, “Evening Time,” with music by Barbara Ferland and words by Louise Bennett. Miss Lou was away from the island between 1950 and 1955, but upon returning, she acted in nearly every show between 1955 and 1975 and was author or co-author of five shows. The Witch (1975) was her final LTM pantomime.

The Kids Are All Right:
Ever wondered what was the inspiration behind the title of Miss Lou’s popular seventies TV show for kids Ring Ding? Chalk it up to one of Jamaica’s age-old customs. “In the old days before radio and television became popular,” she once explained, “every moonshine night families and friends would come together in a yard or on a country road and sing Jamaican songs and dance and play games and guess Jamaican riddles and tell Anancy stories as long as the moon lasted.”

Class Acts:
For most of the Jamaican public, Ranny Williams and Louise Bennett are vividly remembered for their side-splittingly funny lead performances in the national pantomime and for their hit radio collaboration, The Lou and Ranny Show. But long before fate brought them together, Bennett had taken in some of his shows at Liberty Hall when he worked for the UNIA. “Sometimes he says things that you’d heard before, but he can always make you laugh because every time he tells a joke it sounds different,” she recalled in Wilson’s Independence Swing. And in tribute to their friendship and creative partnership, she immortalized him in a 1980 poem, including the line: “When you deh pon stage wid Mas Ran/ Yuh feel grateful fe yuh lot/ For stage got plenty backitive when Mas Ran deh pon spot.”