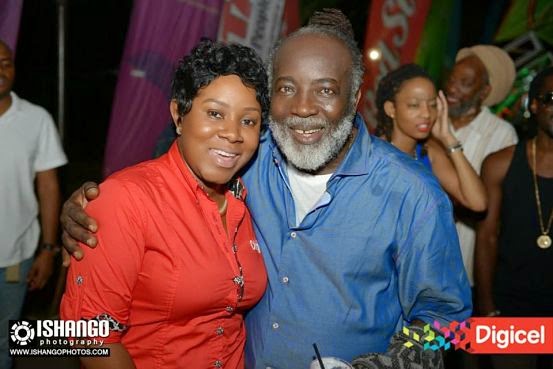 PASSING THROUGH: McGregor, posing with a Digicel staffer, puts in an appearance at the June 10 Sumfest launch.

Freddie McGregor is no stranger to industry accolades but, by his own admission, being selected to receive this year's career achievement award at Reggae Sumfest represents a special recognition for which he's immensely thankful. "I'm not at all surprised by it," he told TV J's E-Prime as he attended the festival's recent launch at the Countryside Club in Kingston, "but I'm grateful that they chose to honour me this year."

McGregor, who's been recording roots-rock-reggae anthems on the Big Ship for well over three decades, will be presented with the award on the festival's closing night, International Night 2 (July 19), joining the likes of Marion 'Lady Saw' Hall and Shabba Ranks as special Sumfest honorees.

The Voice's Tessanne Chin is returning to Catherine Hall for the first time since 2011, but Reggae Sumfest 2014 will also mark a special occasion for performers like I-Octane, who is set to bring the curtains down on a star-packed Dancehall Night for the second consecutive year. His selection speaks volumes of how highly he's risen by the standards of festival mastermind Johnny Gourzong, who consistently strives to deliver quality to festivalgoers. "He did a fantastic job last year," Gourzong says, "and he has something bigger planned for this year."

Speaking with TALLAWAH in New Kingston last month, the high-flying singjay admitted, "I'm always up for the challenge, but let's see what happens. I'm more focussed on giving a good performance whichever way I work on the show."

Meantime, this year's week-long festivities get going on Sunday (July 13) with the Aquasol Beach Party and Tuesday (July 15) brings the White Party at Pier 1. On Thursday (July 17), reggae and dancehall's finest will come together for a sizzling Dancehall Night while Friday (July 18) and Saturday (July 19) belong to the international heavy-hitters led by Beenie Man, Chronixx, Tessanne Chin and the American rap/hip-hop sensations Wiz Khalifa and Future, among others. For fresh daily updates on the fest, check facebook.com/reggaesumfest.