ARTIST WE LIKE: Pam Hunt-Bromfield on keeping the faith through her art 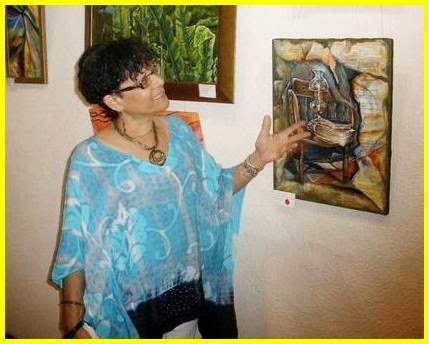 
Pam Hunt-Bromfield's work would have made a terrific addition to the National Gallery of Jamaica's triumphant 2014 exhibition Explorations II: Religion and Spirituality. "Creating art provokes within me a deep sense of fellowship with God and I always want to convey sense of godliness through my works," says the award-winning painter, whose best pieces are like a balm for the soul.

A wife, mother, teacher and businesswoman, Hunt-Bromfield's work can be found in collections in Jamaica, the United States, Germany, Costa Rica and even Abu Dhabi. She holds degrees from the Edna Manley College and Florida International University, where she did her MBA. She makes no bones about creating faith-based artworks that dually pull inspiration from the eclectic lives of others to produce stirring acrylics and mixed medias that capture deeply reflective thought processes and what can best be described as moments of transcendence.

"It's all from life, nature and back to God. Not necessarily religious but a relationship mostly with the Lord and how you are with him at the time. Basically, life experiences on the canvas," she explains.

Usually a body of work allows an artist to delve into a particular issue and emerge a different artist. For Hunt-Bromfield, however, a wide range of moods and motifs, in spite of her divine predilection, have helped to mould her career - from as early as her mid-teens when she was invited to participate in a group show at the UN Plaza in New York.